What if a horror-themed amusement park was actually staffed by werewolves, zombies, vampires, witches, and all sorts of creatures of the night? That's Zombillenium, a theme park that's not doing too well. The authentic mummy (3000 years and still around!) has quit because he gets no respect from the patrons. Some co-workers find him hitchhiking and bring him back. As they argue on the way, they accidentally hit a guy crossing the road. The vampire driver bites him to bring him back to the living, then they bring him back to the park as a new employee. The werewolf HR guy thinks there's too many vampires at the park already, so he bites him to switch him to a werewolf. The driver objects and bites again. They have a funny argument over the situation with plenty of off-panel bites. Eventually, he's given the bottom-rung job--selling cotton candy. And he's given a life-time contract, which in his vampire-werewolf state means eternity.

His name is Aurelian Zahner. He was in the street because he tried to hold up a diner. A witch by the name of Gretchen (who's an intern at the park) was there and magicked him out of the robbery, sending him off into the street. She feels some responsibility for the situation and tries to help him out at the park. Things start to go comically awry for him in his new life.

The book is definitely more of a comedy than a horror story. The art is cartoonish, but in a good way. It fits the tone of the book well and looks good on the over-sized pages (9 by 12 inches). I enjoyed it a lot and am looking forward to the next volume.

Book Review: The Woman in Black by Susan Hill 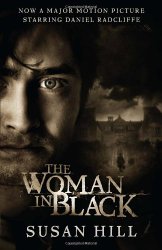 The Woman in Black by Susan Hill


Middle-aged London lawyer Arthur Kipps relates the story of his first out-of-office assignment. He takes a train ride out of a city stifled by a yellow fog. He has to go through the papers of deceased client Alice Drablow, a little old lady who lived in an isolated house on the English coast. The house is called Eel Marsh House and is accessed by Nine Lives causeway during low tide. At high tide, visitors are stuck for many hours. Before he gets to the house, Kipps meets a local solicitor and they go to Drablow's funeral. They are the only mourners. At the grave side, Kipps sees a mysterious, emaciated woman clad in black at the far side of the graveyard. He mentions it to the other solicitor who doesn't want to hear anything about it. Nobody in town wants to talk about Mrs. Drablow or Eel House and they discourage Kipps from staying at the house. Of course, he gets caught there during high tide and at night. Many creepy things happen, including more appearances of the woman in black.

The book is a great ghost story. The spooky atmosphere and looming dread are well weaved into the story. The movie version follows the novel quite closely but even having seen the film I still got nice chills from the book. It makes for excellent Halloween reading.

This month in Cub Scouts: At the first meeting, J's den did the Leaf Rubbing activity from the Tiger Cub Handbook. We volunteered to bring in the materials, a fairly easy task. All we needed were crayons, paper, and leaves. The boys had fun learning more about nature.


The next weekend was the fall camp out for J's pack. He's been excited about camping as a scout ever since he read a biography of Neil Armstrong that described his childhood adventures as a scout, including camping and orienteering. Camping started on Friday night but J has religious education on Saturday mornings, so we didn't head out until late Saturday morning. We arrived at the camp ground just after lunch was finished (we'd stopped along the way so we were okay).

Our equipment was almost entirely loaned--the tent from Auntie M and one of the sleeping bags from Auntie R. Set up was a snap and we were soon ready for activities.


The first activity was cutting wood for the campfire. The scouts had a variety of hand saws, including bow saws, chain saws (not motorized, just the saw), folding saws, etc. J enjoyed this activity. The satisfaction that comes from getting through a whole piece of wood is hard to duplicate. I was busy helping, so no pictures!

The next activity was a relay race through a small course in the woods. Scouts had to walk a beam, then hop from stump to stump, then toss a small branch through a hole. Between each, they had to do ten jumping jacks. J didn't have the best jumping jack skills, but very few of the boys had skills much better. Plus, the running and the course challenges were a lot more interesting than doing jumping jacks.


Another game was ga-ga ball. We lined up nearby benches to make a large circle and the boys got inside. One boy bounced a ball. After two bounces (counted "ga, ga") the ball was in play. Players swatted the ball with their hands trying to hit other players in the leg. A hit on the knee or lower meant the player was out. The last player is the winner and bounces the ball in the next round. J was great at dodging but not so good at aiming the ball. I see a lot of ga-ga ball in our future.

The next activity was a pre-campfire campfire construction. The boys used marshmallows as stones, chow mein noodles as kindling, small pretzels and large pretzels as fuel, and candy corns for flames. Crushed oreos served as dirt to put out the fire later. J assembled his carefully then ate it gleefully.


A spontaneous activity for the boys was mining near an uprooted tree. They pretended they were getting minerals from the ground and building a house from those materials. This activity was particularly popular.


We ate a yummy spaghetti dinner and had the campfire in the evening. Part of the campfire is singing songs, another part is doing skits. J's den leader didn't make it at the last minute because of a family cold, so I was field promoted and led the Tigers in a short skit. It was fun but not really rehearsed. Later, J told me he was a little embarrassed by it but not too badly. Next trip we'll practice ahead of time.

We didn't stay up to make s'mores because J was wiped out by the activities and the long day. He's usually in bed by eight and the campfire didn't end till nine or half past. We turned in for the night, which was a very cold night. The temperature fell to 40 degrees Fahrenheit. We got up once about five a.m. to use the toilet. The stars were amazing and plentiful.

In the morning we were the first up and I had the first cup of coffee from the pot, which was nicely warming.


Sunday breakfast included oatmeal, fruit, bagels, and some leftover eggs and sausages from the day before. No need for a refrigerator when the weather is in the low 40s! After breakfast was some more minecrafting followed by a short, age-appropriate, ecumenical religious service. We broke camp, helped haul all the pack's equipment back to the trailer, and headed home with happy memories of camping.

At the end of September 2014 we went to an Oktoberfest in Frederick, Maryland. It was held at the fairgrounds and was a fun time for young and old. Especially for those who could drink beer.


We entered by the front of the fairgrounds and immediately ran into a pen with two alpacas in it. The owners have a farm and make alpaca wool products. We were more interested in petting than in purchasing.

Across the fairway a group a booths were selling souvenirs and strudels. We didn't buy any souvenirs and waited (but not very long) to buy a strudel. It was delicious!


The main building was the fest hall where food and beer were served while polka music played. We spent a good bit of time in there, enjoying the band (Mike and the Continentals) and the folk dance company (Bairisch und Steierisch). The company would perform during dance breaks and invited audience members to join in. I was off getting beer or I would have gladly volunteered.

The beers I did have were the following:
Other than the strudel, we didn't have any German food, which is a bit of a shame but I'm sure we would have spent too much time trying to convince J and L to eat.

Later on, the band had a polka contest. By that point, my sister and niece had arrived so they held baby N while my wife and I danced. We came in second place!

Happily, there are no pictures of our performance so you, dear readers, can't tell if we just didn't have any competition (except for the winning couple, who won a certificate and some free beers) or struggled our way to the top.

Outside were plenty of booths selling a plethora of wares from home-made clocks to clothes to jewelry to t-shirts to candy.

L got a gummy rat at the candy shop which she ate while we danced.

Also outside a local wood carver was demonstrating his art while selling his products.


The most popular spot outside for J and L was the kids' zone. J loved the bouncy castle, L the crafts. She decorated a pumpkin and stuffed a scarecrow. The area also included a DJ and dance floor but the DJ was playing more adult music than I thought appropriate. Maybe that's why no kids were dancing.

Happily, we avoided making the scarecrow until we were ready to leave, so we didn't have to carry it around, just back to the car. A fun time was had by all!

Larriland Farms, like all good farms, offers a hayride around the farm so visitors can see what they have. The ride starts with a cruise past the lake. It looked so refreshing J wanted to go for a swim. We visited in October, so even though the day was warmer we were sure the water was colder. Lucky for him we said no because we discovered what was living in the lake!

The next part of the hayride took us through a wooded area which has many recreations of famous people. First up were famous Americans.


The next part of the woods was Middle Earth, with some familiar characters in their natural setting.

The next sign said we were entering the Hundred Acre Wood, which meant seeing Winnie the Pooh and his friends.


Next came a quick trip through Hogwarts and Duloc. We had to think a minute where Duloc was but it came to us quickly.

Meanwhile, J and L were burying themselves in the hay, demanding pictures of their rapidly vanishing selves.

The rest of the farm is taken up with plants and bushes and trees and other such less interesting but more farm-like stuff.

After the ride, we were tuckered out.