Book Review: The Life and Adventures of Santa Claus by L. Frank Baum 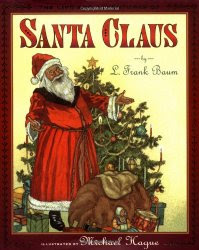 The Life and Adventures of Santa Claus by L. Frank Baum with illustrations by Michael Hague


Providing Santa Claus with a back story seems a bit unnecessary. His breadth of cultural presence is so far reaching that people don't think about where he came from. He's been around since time immemorial. He has little differences here and there but his basic characteristics are universal--big, generous, bearded old guy with a red suit. But from whence did he come?

L. Frank Baum (the writer of The Wonderful Wizard of Oz) doesn't bother with historical or literary research. Instead, he weaves a new tale going back to Santa's infancy. Like many literary heroes, in this version the infant is left as a baby on the edge of a woods. He is discovered by a wood nymph named Necile. She becomes his foster mother and raises him among the other immortal mythological creatures of the woods. She names him "Claus" which means "little one" in their language. He grows to love the outdoors and his fellow creatures. As a youth, he is taken by Ak, chief of the immortals, to see other humans. Claus falls in love with children, especially the poor ones who have nothing to cheer them. He moves to his own home and begins making toys for local children to cheer them. Bit by bit, elements of Santa's mythology (chimneys, stockings, trees, reindeer, etc.) are pulled into the story. By the end Santa Claus is up and running with all the details from the stories we know (much like James Bond at the end of Skyfall, actually).

The book is very charming and whimsical. Baum has a knack for inventing details and writing in a fairy story style. The illustrations in the edition I read are delightful. I am surprised that the story doesn't have more prominence among other Christmas classics. It does lack the compelling villain (like in It's a Wonderful Life, A Christmas Carol, or How the Grinch Stole Christmas) found in other classics.