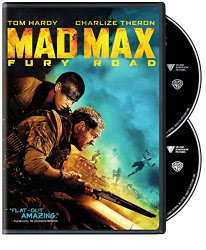 
Mad Max (Tom Hardy) winds up a blood donor for a low-level combat driver in a post-apocalyptic town where the main commodity is water. Water is pumped up from deep underground and given to the locals to keep them local. The leader is a fellow named Immortal Joe. He maintains the water distribution, trades with Gas Town and Bullet Town, has an army to caravan the water around, and has a group of wives. Or he had a group of wives--they've snuck out in one of the water delivery trucks driven by Imperator Furiosa (an unrecognizable Charlize Theron). She is taking them to a green place, the Land of Many Mothers, where they won't have to be incubators for Immortal Joe's offspring. Joe doesn't take kindly to them leaving and mounts up a retrieval mission. The combat driver brings Max along so he'll have enough blood (they are attached by a tube after all). It's a slim excuse to get Max into the action but it does get him there. Lots of road chases and fights follow.

The real star of the movie is the amazingly inventive action sequences. No two vehicles are the same and they are all DIY smash-ups of at least three vehicles. Some are mounted with harpoons; some with flame throwers; some with really big guns; some with cow-catchers; some with plows (it makes sense in the moment they are used but at no other time); some with cranes; some with big long sticks with a harness on the end so guys can come flying in to attack another vehicle and fly back out (also only makes sense when they are used); most vehicles have combinations of the foregoing. With all this random equipment, the forces of good and evil can have plenty of tightly-choreographed and eye-popping battles. The sequences are well-shot and edited so viewers can follow the action and know who is where (which doesn't always happen in modern action films). It's breath-taking and fun and completely bonkers.

Sure, there's references to hope in hopeless circumstances, and how people aren't things and shouldn't be treated like things, and characters seeking redemption. But that is all more or less window-dressing to give viewers something to care about in the slight pauses between the amazing action sequences. This is a high-octane, over-the-top action film with just enough heart in it to hold things together.