Jacob got some balloons last night from Uncle Brian and Aunt Teresa. He loves them* dearly. You know the old adage: If you love someone, you have to let them go. So this is where one of the balloons wound up today: 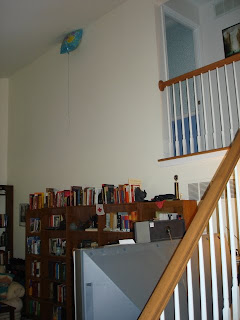 As you can see, we have a nice cathedral ceiling in our living room with an open walkway on the second floor. Too bad the balloon was too far to reach from the second floor. Aus a tool was required. Here were the three I thought might do the trick:
The fan was useless, since any breeze it generated was too weak to move the balloon. The string moved around a little. The telescoping feather duster seemed like it would do the trick. Appearances are deceiving:
I did think about using the vacuum cleaner's telescoping wand to suck down the balloon's string and thereby get the balloon, but I feared the balloon would get destroyed in the process. That left hitting it with a small, Nerf-like ball. The sort that Lucy likes to chew on because she can get chunks out of it. Luckily this ball has joined Raggedy Ann and Andy in WITSEC, so it was fully able to serve in a covert mission while the children slept. After two hits (shamefully the number of throws was many more than two), the balloon made it to a reachable spot: 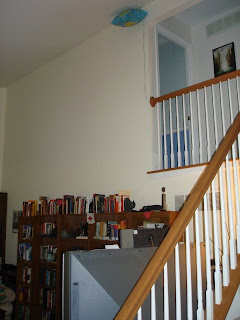 In fact, I left it for Jacob to find. After his nap, he was delighted to grab the string and pull in his balloon. All is well until the next release. Or Lucy gets a hold of it.

*I realize the use of "them" is ambiguous. Of course he loves the balloons AND Brian and Teresa.
Posted by Joseph R. at 11:20 PM