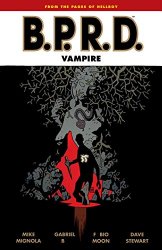 
The B.P.R.D. has a long history of collecting misfits and using them as field agents. Hellboy is a demon child summoned by the Nazis at the end of World War II to change their fortunes. Abe Sapien is a fishman from the American Civil War era. Roger the Homunculus was grown in a German castle as a slave for bad guys. In B.P.R.D. 1948 Agent Simon Anders was a normal human until the souls of two crazy vampire sisters were imprisoned in him, turning him into a vampire. In this sequel, it's still 1948 and all Anders wants to do is hunt down other vampires. He's had dreams of a bizarre ceremony of vampires killing witches, nightmares inspired by the sisters' memories. Professor Broom sends him to Soviet Czechoslovakia to investigate a site of possible vampire activity. Anders goes on his own, hoping to wreak some vengeance.

The story is a fine blend of creepiness, sadness, and mythology that is so common in Hellboy and B.P.R.D. stories. The art does a great job of mimicking Mignola's style and telling the story without a lot of dialogue. It's well worth reading.

The cathedral of St-Malo is dedicated to St. Vincent. Construction began in the 12th century and was finally completed in the 18th. The architecture thus has many influences.


The nave shows the church's Romanesque beginnings while the choir is more Gothic in flavor. The contrasting lighting is just one clue.


In the floor of the nave has the tomb of Jacques Cartier, a French explorer from St-Malo who traveled in the 1500s and claimed Canada for France.


The church has many fine statues all over the place, including a moving pieta and the 15th century statue of Our Lady of the Grand Port.

The church has two baptismal fonts, one clearly more ancient than the other.

Another interesting decoration is a boat. It's a model of Rene Duguay Trouin's boat. He was baptized in the cathedral. Later he became a successful privateer and naval officer, rising to the rank of admiral.


The church also has a nice organ, though we didn't hear it played. 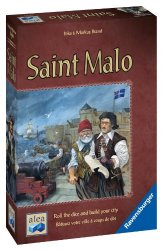 
Saint Malo is a port town on the English Channel coast of France. It is a walled medieval city that was home to both pirates and legitimate sea merchants. In this game, each player builds up the city by constructing walls, churches, and houses and by recruiting various citizens. Each player starts with three coins, two logs, and some crates in their city, which is represented by individual dry erase boards.


The main mechanic of the game is rolling five dice with six different symbols--log, crate, wall, church, person, and pirate.


All are useful except the pirate. The player may re-roll as many dice as he or she likes two times, trying to keep enough of an individual symbol to get something really valuable. The player can only trade in one symbol to add something to the city. If the five dice show two walls, two persons, and a church, the player can either (1) add two walls to their city or (2) choose between a soldier and a priest (either costs two persons) or (3) build a simple church. The player then draws symbols on the individual dry erase board to show their choice. Placement is important.


The rules about what players can do is a little complicated because of the five different symbols and how many dice came up with the symbol. Walls, crates, and logs are straightforward--players add one to their board for every dice rolled (logs have the additional requirement of paying two coins for delivery). Churches are built with different values (from one to five) written inside them. Many different people can be recruited depending on how many dice are rolled. Luckily, the main board provides a "cheat sheet" listing who can be chosen.


The main board also tracks how many pirates are rolled. Once a row is filled, the pirates attack and any city that doesn't have enough defenses (measured in how many soldiers and full walls the city has) loses one of the cannons at the top of the city, which is negative five points at the end of the game per cannon.

The game ends when the first player completely fills his or her city's area. Everyone gets an equal number of turns so a few more players could have a last chance to finish their city. Scores are totaled and whoever has the most points wins.

The game is fun but play can feel a bit like solitaire. Interaction is minimal though a player might try to rush the game to an end before everyone else is ready. Even if you don't win, it's fun to look at what's been built over the game. The game is a little too complicated for J and L, but in a couple of years J will be eight and ready to go.


Zombie Apocalypse Appropriateness: The game is a set of dice, some small boards, and dry erase markers. Like I said, the game is a bit like multiple solitaire so it could be played solo but a player would have to worry about the availability of dry erase markers and cloths to wipe the boards clean. On the other hand, it would be nice to practice rebuilding society and creating a walled town seems like a good choice for keeping zombies out. 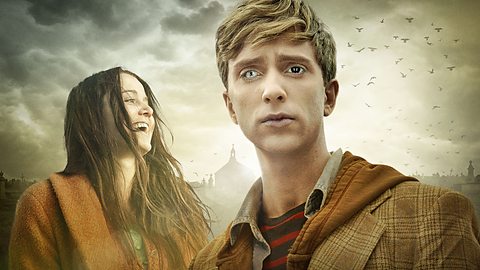 
See my review of Series 1 here. and of the first part of Series 2 here.

The second half of the second series pulls things together. The prophecy of a second rising is taken seriously by both the Undead Liberation Army (represented by Simon) and Maxine Martin, Victus-sponsored MP for Roarton. The prediction is that whoever rose first in the first rising has to be killed on the 12th hour of the 12th day of the 12th month for the second rising to happen. Simon thinks that person is Kieren and he's ordered by the Undead Prophet to kill Kieren at the appropriate time. Only problem is he's falling for Kieren so he may not have the nerve to do it. Also, they are framed for pro-zombie crimes with the threat of being sent off to Norfolk for more treatments. Meanwhile local councilman Philip Wilson been visiting a zombie brothel (yeah, you read that right) and has to make hard decisions about his future when the news threatens to spread. Poor Amy Dyer is caught in the middle of it all, losing Simon to Kieren and fending off other unwanted attention.

The various story lines have a varying level of interest. I found the "second rising" plot line (which is the main one) the least believable, though the actors do a good job--the writing is the problem. Maxine's ultimate motivation makes little sense for her character. Simon's history at the Norfolk center is shown but seems like little more than an excuse for some gore and torture and to show how attached he is to the Undead Prophet. On the other hand, Amy's journey from her affection for Simon and Kieren goes in new and interesting directions, as does Philip's.

For me, this second series is a mixed bag--some good stuff and some bad stuff. I'd watch a third series but I'm not going to hunt it down.

St-Malo has a long history as a coastal town, dating back at least to the early 1300s. Its seaside location made it a prosperous port. The seamen ran the gamut from legitimate shippers to privateers (the respectable term for "pirates"). After the English attacked in 1693 and 1695, the locals wanted to fortify the town. Architect Simeon de Garangeau did most of the design work. The town lasted till the end of World War II, when 80 per cent of the town was destroyed. They rebuilt as close to the previous style as they could, and the town retains its ancient flavor.

As I said in the previous post, we entered through the main gates, the Porte St-Vincent. Immediately on the right is the town's castle, built by John V Duke of Brittany in the late 1300s and expanded by Anne of Brittany.


Near the castle is a plaque in remembrance of local-born author Francois-Rene de Chateaubriand, a Romantic writer from the early 19th century.


We wandered among the streets and came into the courtyard La Houssaye, with a thirteenth century turret. The turret was part of a home that was known as "Houssaye." The home was part of the town walls (the one prior to the 18th century rebuild) and had a garden.


L discovered a repeating symbol in the pavement. It's the town symbol and must mark a touring trail or historic site.


A nearby street has the colorful name rue du Chat qui Danse or "Cat Who Dances," which our guide book assures us is a reference to the women of the night who plied their trade with lonely seamen in the neighborhood.


The street leads out to the town wall, which we ascended at the Tour Bidouane, a tower that predates the 1700s walls. The tower was built around an existing arsenal. The views from the top are quite enjoyable.

We walked along the wall and found a great restaurant where we had some crepes. My wife and I had the local specialty, topped with salted caramel. J had a lemon crepe (which he ordered himself!) and L had nutella on hers. The waitresses were dressed like pirates in puffy white shirts, tight black pants, and a red sash for a belt. The walls had blunderbusses and cutlasses on the walls, as well as paintings of ships and seascapes. A little kitschy but fun.

After the snack, we walked back down into the city and wound our way to the central market square. The area was bustling with people and we were happy to discover a board game store called Jeux Sortileges. We decided to pay a visit. In the store we found a game called Saint Malo which we couldn't resist buying since we were in St-Malo. We bought some games for the kids too.

We left via the Grande Porte (another access point to the walls) and drove off satisfied with a fun visit.

St-Malo is a coastal town on the French side of the English channel. Like many coastal towns that date back centuries, a good portion of the town sits behind stone walls to protect it from invaders by land or by sea. We visited the town one afternoon and enjoyed both the inside and the outside of the walls. Today's post will talk about what we saw outside.

Being centuries old, there is very little parking inside the walls (the buildings are all crammed in together with only the occasional plaza). We parked by the marina, giving us a nice view of both boats and walls.

We went through Porte St-Vincent, which was the main entrance for the town. The walls are 23 feet thick here and a walkway goes along the top. After wandering through some streets, we went out to the seaside beach where the Fort National sits.

Several forts were built along St-Malo to protect the bay. Fort National was built in 1689 and can be explored in the summer. We were there in the spring so we could only scramble around on the rocks.


We didn't stay by the fort too long but we did enjoy the beach.

We headed back into the city to explore the walls and some of the buildings, which will be in the next post.