The Baltimore and Ohio Railway Museum: Ellicott City Station is located in the oldest extant railway station in America. The station was built in 1830 and was the first terminus for the fledgling railway line, 13 miles from downtown Baltimore. The first trains (which carried freight and passengers) were pulled by horses! Locomotives came later. The station was in use until the mid-20th century. It closed in the early 1970s and was converted to a museum as part of the bicentennial buzz of the late 1970s. It has remained in operation since then with occasional special exhibits and special events.

The first floor has a recreation of a freight agent's living quarters. The railroad line was used mostly for hauling freight to and from Baltimore harbor. The company housed an agent here so he could deal with the day-to-day business of running the railroad. The great flood of 1868 saw most of the station submerged in overflow from the Patapsco River. After restoring the station, the company moved the agent to a nearby house (on higher ground).


I was proud to see my son reading all the signs at the museum, soaking in the knowledge made available. He read some of it aloud so I was able to hear more while keeping an eye on the other children.


Upstairs, on the track level, the museum has recreations of the business office and waiting areas for the handful of passengers that used the trains. They had different rooms for men and women to wait in, since the ladies of the 1800s didn't want to deal with smoke or chewing tobacco from the male passengers.


The museum has some authentic maps of the route, arrival board, and vintage graffiti.


There was more on the Civil War in this area, but it was hard to get a good picture that included President Washington at the top.


Outside is a 1927 I-5 caboose. We went inside and explored what it was like for train workers who lived at their workplace.

The 1885 Freight House is now home to a massive model train set that recreates the 13 miles of track from Baltimore to Ellicott Mills around the 1860s. Union soldiers are encamped along the tracks to keep them safe. A docent in this building told us that the railways often kept supplies along the tracks in case of accidents or (during the war) sabotage. The workers could get the tracks back in service in less than a day!

On our way out we saw a station bell and the children could not resist ringing it. A sign nearby said visitors are only allowed to ring it once, so we did only two ring.


The museum has a lot to offer and we were glad we went!

The local Cub Scout district held a Bike Rodeo for the scouts in September. Our little Wolf cub went bright and early to have his bike checked out and participate in all the activities.

One of the first stations was a bike pseudo-wash which was a fun obstacle.

Speed trials (in this case, a snail race - trying to be the slowest without putting your foot down) were part of a larger obstacle course. Our scout tried it out with another boy.


Another challenge was the classic "paper carrier" route. I wonder if kids still have paper routes these days.

The stations also included some check ups on tire pressure and breaks. The bike is in great shape.


At the end he was issued a license, a nice end to a fun morning!

Book Review: The Sword Vol. 1 Fire by the Luna Brothers

The Sword Volume 1 Fire by the Luna Brothers


Paraplegic art major Dara Brighton goes home to have dinner with her parents and sister. They have a pleasant evening until three strangers arrive at their suburban home. The strangers call the father "Demetrios" and demand that he turn over a sword. He denies any knowledge of them or a sword. They search the house. Finding nothing, they decide to torture the information out of dad. They use supernatural elemental powers to harm the family but the dad doesn't give in. They kill the mother and the sister and then start in on Dara. The dad grabs at them and they decide to torture him instead. The female stranger has air elemental power and uses electrical energy on him (which you'd think would go with a fire-based power, but it isn't here). She overdoes it, killing the dad and setting the house on fire. The strangers decided to leave after some of the roof collapses on Dara. They assume she'll die in the fire. She actually falls through the floor into a pit under the house where she discovers an ancient sword. She grabs onto it and her legs are healed. She races out of the house and hides the sword in their pond as the cops show up. She pretends to be crippled as they ask her what happened. She's vague about the details because she doesn't want the cops hauling her off to the nut house. Things get out of control quickly after the three strangers (who are siblings) find out Dara survived the attack. They make plans to get their sword back. But Dara has discovered that the sword not only heals her, it also gives her superhuman fighting and jumping skills, so things aren't as unevenly matched as they might otherwise be.

The story moves at a good pace and explains a lot of the mystery behind the sword by the end of this first volume. The characters are interesting and believable. The art is good, though I find the occasional blurring of an image to indicate speed a bit distracting. The violence is pretty graphic, with lots of people getting cut into pieces by the sword, but they don't dwell on the gore like The Walking Dead or Mark Millar's stuff tends to. It's an enjoyable read and I am ready for volume 2!

Parental warning: in addition to the heavy violence mentioned above, the language is very adult (lots of f-bombs, for example), and there's one mild sex scene that include drug taking (though it really has almost nothing to do with the plot). Late teens and up would be my recommendation. 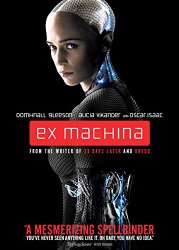 
Computer programmer Caleb (Domhnall Gleeson) wins a lottery at work (the big internet search engine company, though of course it isn't called Google in the movie). The prize is to visit the reclusive founder and owner of the company (Oscar Isaac) on his remote estate for a special project. The owner's name is Nathan and his home is actually a research facility where he has been working on artificial intelligence. He's built an android named Ava and wants Caleb to give it the Turing Test (the one where a person has a conversation and has to determine whether the other conversant is a human or a robot). Something fishy is going on, because Ava is clearly a robot and Nathan is very casual and imprecise about the feedback he wants from Caleb. Nathan and Caleb have interesting discussions about consciousness, human attributes, and what the end result of the week-long experiment is supposed to be; Caleb and Ava have interesting conversations about their histories and what it means to know someone and care for them, both as a friend and with romantic intentions.

A lot of interesting issues and ideas are introduced in this movie. The pacing is slow and the photography is beautiful, giving the viewer plenty of time to think about what's going on and consider the contrast between the idyllic natural setting of the remote estate and the antiseptic artificial setting inside the research facility. The conversations and the narrative are always fascinating and left me with questions I really wanted answered. A lot of those questions were answered. But the end of the film is strangely ambivalent even while some highly dramatic events occur. It's as if the filmmakers themselves have a casual and imprecise grasp of what they want to say with this movie. Maybe they just intended to present an interesting story. If so, they were successful but I find myself unsatisfied after watching it. Repeat viewings could make it seem better or worse, I honestly don't know.

Parental warning--there's a lot of female nudity in the film, a little bit of sex and a few conversations about sex; some drinking and drunkenness; a bit of swearing and a few moments of bloody violence. With all the discussions about AI and what constitutes human behavior, I can't really see people under 15 enjoying the movie. I'd recommend late teens and up as appropriate for watching this, though I am not sure I'd recommend the movie itself as entertaining. It makes a better talking point for various issues and ideas.

We played in two Organized Play events since the last Dicemasters report. We played at Trinity War Event 3, where my son J. came in second place. He won a special Shazam! card along with the Wonder Woman participation card. The Shazam! card has an interesting power (getting him to the field quicker) but with a maximum of one die, that's not a lot of action. Wonder Woman's ability to spin up characters looks a lot more useful.


At Event 4, J. had a team of all common cards, including his favorites--Vibe and Superman. When we played in the second round, I almost knocked him out but he was able to field both Superman and Vibe at their top levels along with a sidekick, dealing a whopping 15 points of damage to me. I thought I was fairly safe with 14 points of life but I wasn't. J. won all of his other games and came in first place for the event! Firestorm was the pecial card, preventing an opponent from fielding Justice League characters while he is in the field). Martian Manhunter was the participation prize and he is not so amazing (fist characters deal him no damage?!?).


We are looking forward to next month's big finale for the Trinity War play (and maybe some Marvel action in the coming months!).

Random Bits from the Summer

Here's a bunch of photos from the summer that didn't make their own blog.

The summer had plenty of outdoor and indoor activities that the children enjoyed.


My wife and I spent the night in St. Paul before my flight to Gen Con. We went for a walk and dinner and saw some fun buildings along the way.


Moscow on the Hill is a Russian restaurant and vodka bar where we didn't go to dinner. They have a cool book exchange box just outside.


In Indianapolis, I finished reading Unpopular Essays. I decided I didn't want to keep it. Happily, my hotel's parking lot had a perfect disposal solution: