Book Review: Marriage is Like Dancing by Richard C. Eyer 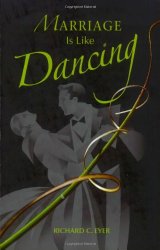 
Richard Eyer's book draws a nice parallel between dancing (particularly ball room dancing) and being married. The couple needs to communicate and to know their individual roles and routines in order for things to go smoothly. A lot of effort and practice is needed to get to a comfortable, expert level. Even becoming more proficient is not a guarantee against the occasional mistake. A fun-filled and forgiving attitude is required for both dance partners and married couples.

The simile goes deeper. He talks about the dance role of the man (the leader) and the woman (the follower) and how those roles parallel the headship of the husband and the obedience of the wife. Aware of their roles, things work out better. Of course, at times the woman/wife needs to lead and the man/husband follow. Having a proper connection makes such times natural.

Eyer often mentions how we are made in the image of God but never articulates how that is significant for his argument. He references St. Paul's idea that the husband/wife relationship is a reflection of Christ's relationship to the church, but that is a different principle. It leads to some mixed results. When he talks about a spouse dying, he says, "In marriage between a Christian husband and wife the surviving spouse will be able to continue the dance of life with the Lord as stand-in partner." [pp. 135-136] I find this very awkward and untrue. The grace of God is always there, before and after the death of a spouse, it doesn't suddenly become a substitute for the loss. God's grace should help in the loss just as it helps in all of life's trials. On the other hand (and the other page, 137), Eyer understands the Christian notion of the afterlife so well:


In the resurrection, my wife and I will see each other again, not as husband and wife, but as something more. Our love for each other will be greater then than it is now, as it will be with all who are one in Christ. As much as I love my wife, I do not look to heaven to see her as my wife, but to see her with the Lord. She will see me with Him also and our joy will be greater than it is now. [p. 137]


The good simile between marriage and dancing is fascinating but gets stretched a bit, at time too much. I liked this book but didn't love it.

The book does have an appendix with study questions for couples reading the book. The author does not recommend using it in a group setting since the questions are personal and focused on the needs of an individual couple.

One of the great features of our first hotel in Catalonia is the pony rides. We paid a nominal fee for J and L to ride around the property on ponies. L was a little nervous at first but J had experience from last Christmas, so he was ready to go. We walked down to the stables to get the mounts.


L's horse is named Pinchy (or maybe it was Pinchot, the owner's accent was a bit thick). J's is named Rocky. We guided the horses up to a building where the saddles are kept.


After the owner saddled them up, J and L got on and were ready to ride.

We set out, first following the driveway back up to the main road.

Soon enough we discovered that the ponies like to take breaks and eat any vegetation in front of them. Pinchy was especially hungry and made many stops along the way.


We came back down the hill and wandered along many different paths in the woods. It was fun and a lot more riding than we were expecting.


We agreed with the ponies that much of the vegetation was fairly interesting. We saw some pretty flowers along the way.


The kids enjoyed the ride immensely, pretending to be cowboys and adventurers.


At the end of the ride, L got to help cool down and brush the horses. J and I headed back to our cabin to get dinner started. After a good long ride, we all had good sleep that night.

Now, back to the beginning of the Spain trip--The first hotel we had on our Catalonian trip is located in a park up in the rolling mountains about an hour from Barcelona. We had to turn onto a dirt road just after kilometer marker 8 of a winding mountain road. The entrance is non-descript and the drive down the driveway took a good three minutes. This place is not easily accessible. But it is quite beautiful, nestled away in the hills of the park. It's more like a cluster of buildings on a hillside than a hotel. The views are wonderful.

The place has a nice garden (the gardener gave us some veg!) and a gigantic bird coop that contains six chickens, a peacock, and a peahen.

J and L were disappointed that the pool wasn't open yet (early May temperatures were hot enough for us but not for the locals) but they loved the outdoor seating in front of our cabin.

Inside is quite spacious, with a well-stocked kitchen and living room. "Well-stocked" for the children of course means a cabinet full of toys!


Even better for J and L the compound has multiple playgrounds, including a Foosball table and a ping-pong table. Neither game was as satisfactory as the swings and climbing opportunities the place provides.

J and L made up a game called "Alert." Every now and then they'd claim a storm was coming and they had to rush into the log cabin as fast as they could. They weren't done until they sealed up all the shutters. We heard them making storm sounds from inside. Obstacle courses were another favorite of J's.

The biggest fun might have been the pony rides we did on Sunday afternoon, but that's a story for the next post.

After purchasing tickets to see the inside of the Basilica Sagrada Familia, we had to wait about an hour to use the tickets. Luckily, a small park is across the street and we were able to kill plenty of time and use up the kids' excess energy.


The equipment was fairly standard. L pretended to bake treats made out of sticks, leaves, and dirt. J was able to make several obstacle courses through the playground. He had Mommy and Daddy time him. His goal was to finish in under a minute. Our counting was...flexible. He was quite successful.

L also wanted in on the action and encouraged us to count slower as she ran the course.


After a while she went back to baking treats for us. They were pretend treats and we pretended to eat them.


Time went quickly and shortly we were off to visit the big church across the way!

Today begins posts from our Spain trip back in May. This church is one of the last things we saw, but the most grand.

The Basilica de la Sagrada Familia is the most famous religious landmark in Barcelona. It is visible from many parts of the city and has been under construction for more than a century. The original 1882 plan was a simple, conventional Gothic church. A new architect was brought in, Antoni Gaudi, who let loose with his fervent and fabulous imagination. The church has a deliberately organic feel and look to it. Gaudi lived on site supervising the construction for the last 14 years of his life. He died in 1926. In 1936 many of his models and plans were destroyed in a fire started by partisans in the Spanish Civil War. Construction resumed in 1952 and has had a recent boost from increased attention (in part due to the Olympics) and increased revenue (thanks to charging admission to the church). The building is still under construction though the hope is to finish by 2026 for the hundredth anniversary of Gaudi's death. Work is progressing.


We bought tickets when we arrived and had to wait an hour to get in. Pre-ordering online might have been a better option but we didn't know when exactly we'd get there. The wait wasn't too bad. On our way in, we picked up the audio guides, which were very informative but a little hard to follow from spot to spot. A map would have helped out.


The interior has plenty of light but the columns to support the church struck me as odd. Listening to the description I found out the obvious explanation. The columns look like tree trunks, splitting at the top and having a leaf-like canopy at the ceiling.


The stairs to the towers also look organic, winding around in the corners of the church.


The main altar is a bit garishly lit by its baldachin but is otherwise the plainest thing in the basilica.


Underneath the altar is the crypt, visible through small windows on the sides.


The crypt includes much more than the chapel we could see. After the obligatory visit to the toilet for the children, we found an extensive museum dedicated to the construction of the church. Several displays showed the interesting mathematical background to the design.

The crypt is where Gaudi had his workshop, the one that was burned during the Spanish Civil War. It is now a workshop again, with models approximating his design and model makers still working.

Gaudi's tomb is also in the crypt though I did not find it. I did find a 1989 bust of Gaudi by Josep Maria Subirachs. He also sculpted the figures for the Passion facade.


I had mixed feelings about the church. My first impression was it was over the top with personal style, a style unique and off-putting. The more I learned about it, the more I appreciated it. I still haven't embraced the visual style. Perhaps on its completion my opinion might change or with more familiarity.
Posted by Joseph R. at 2:00 AM No comments: