Converting temperatures has been a challenge here in the UK, especially since I bought a beer the other day and it says, "Best served at 13 degrees." I figured that had to be Celsius since there was no popsicle stick in the bottle. I put the bottle in the fridge, went to metric-conversions.org and found out the formula for converting, which is:


To convert from Celsius to Fahrenheit you must multiply by 1.8 and then add 32. For a weather temperature you can make a rough estimate in your head by doubling the Celsius value and adding 30.

Of course, I just used their instant calculator to find out the temperature is supposed to be  55.4 degrees Fahrenheit. Guessing that's warm for refrigerator temperature, I left the bottle out to warm up a bit when I got around to drinking it the next day. 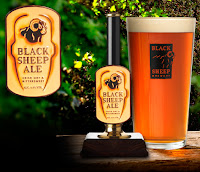 The beer is Black Sheep Ale made in Masham, North Yorkshire, i.e. it's a local brew. And a yummy brew. The flavor is much like Guinness, though not as harsh. The beer was a little darker than in the picture you see here. That's what I get for stealing a photo from their glossy web site!

We may have to go and take one of their shepherded tours of the brewery. [Editor's note: bad pun was stolen from the brewery's web site] We will definitely report back if/when we do.

The next day I had a Samuel Smiths Organic Lager, also brewed less than 10 miles away.  It was delightfully crisp and refreshing after a long day of running errands with the children. I was in a sort-of fancy restaurant and tried to take a picture stealthily: 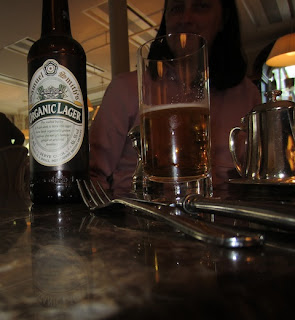 Not a very flattering angle, though I like the reflection on the table. That's what you get for trying to be sneaky. I wasn't very sneaky, though, because the flash went off.

I'm looking forward to other local brews as well as traveling to other regions and countries and trying their fare as well!
Posted by Joseph R. at 4:30 PM