Book Review: In This House of Brede by Rumer Godden 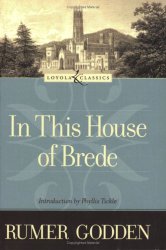 In This House of Brede by Rumer Godden


Phillipa Talbot is a successful British woman who is a mid-level bureaucrat in the government, a high position for a woman in the 1950s. Her staff adores her and she has a small set of close friends. But she has a secret--she's been exploring a vocation as a nun at a Benedictine abbey. As the book begins, she tells everyone of her plans, gives away her things, and heads off to Brede Abbey for a completely differently life.

Life at the abbey is difficult for Phillipa. She's much older than the average novice, having her own ways and ideas more firmly entrenched than other novices. The dramas of life are not left behind either. Some of the nuns are easy to get along with; conflicts arise with others. The abbey itself faces many challenges. Some nuns look forward to a more progressive and proactive life in the abbey; others want to maintain the traditions in perpetuity. Phillipa's struggles are woven into those of the other nuns. The abbey has external challenges as well. Visitors come to seek advice, family members and friends both bring and cause problems.

The book is an amazing journey into the life of the abbey. Godden shows every aspect of the nun's lives--not only their outward actions but also their inner thoughts and ambitions.  Since the story starts with Phillipa's entrance, the reader joins her in confronting the overwhelming changes found in the cloistered life. Like the rest of the world, there are hardships and joys, jealousies and friendships. Phillipa's growth as a person, her flourishing in her vocation, spring from the conflicts and consolations she finds at Brede Abbey. In a way, the book comes full circle. Dame Phillipa is a successful Catholic nun who humbly accepts her role serving the nuns of the abbey.

Listen to a great discussion of the book at A Good Story is Hard to Find podcast.