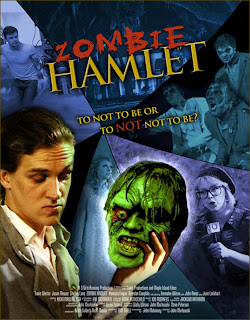 There's a movie coming out called Zombie Hamlet. You might hope it's about some small town in the countryside being overrun by zombies, but no, it is Shakespeare's Hamlet, as is clear from the poster.

No, it's for real...check it out on iTunes. Though this isn't really an adaptation of Hamlet, it's about a first time film director who makes a deal to retheme Hamlet as an American Civil War story set in Louisiana. Financing from Hollywood falls through while they are on location. A local matriarch is willing to put up $300,000 for the film, which inspires them to aim low by adding the zombie theme. This movie looks as terrible as the description sounds. I can't believe it's really going to play in movie theaters. It seems like it should be premiering on the SyFy channel...on a Saturday afternoon. Yikes!

Okay, originally I was going to spare you a YouTube link to the trailer and make you go to iTunes for it, but I've relented. Here it is for your viewing pleas...uh...for you to view.

It's odd that no one has "zombied up" Hamlet yet. The play seems pretty ripe with opportunities:
I could go on, but you probably don't want me to. My apologies to anyone for whom I have ruined future viewings of Shakespeare's greatest work.