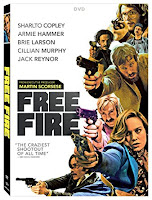 
Some Irishmen meet up with a South African arms dealer at a warehouse in Boston during the 1970s. Naturally there's some tension since money and weapons are exchanged. At least, that's what's supposed to happen. One of the low-level guys on the Irish side had a run in the night before with one of the low level guys on the arms dealer side. The higher ups try to make them patch up their differences but it doesn't work. Soon enough everyone is shooting at everyone else and crawling around the floor trying not to get shot. The movie has about twenty minutes before the bullets start flying, then the rest is the extended shootout--your standard "arms deal gone wrong" premise limited to one location and playing out in real time.

Director Wheatley gives the action more realism than is typical for an action film. There's no slow motion or people flying through the air. But it isn't too realistic. A lot of people get shot in the shoulder or arm or leg, keep moving around, and later on get shot in the same spot. The injuries at first look convincing but they get more unbelievable as the story goes on, even though they don't get particularly gorier or more outrageous (the only exceptions being the guy whose head is run over and the guy who winds up on fire). The semi-realistic violence doesn't quite work though it does make for a tonally lighter action drama.

The realism and grit are also lightened a bit by comedic elements. At one point, one character says, "I can't remember whose side I'm on." The plot is a bit messy, as if having the cool gun fight was more important than having a coherent story. The comedic elements are fun but they don't help the story or make the characters more appealing (except for the gun dealer played by Sharlto Copley, who, as an actor, tries hard to go over the top in this film).

The weak story could have been okay--a typical action film runs on a minimal plot and the appeal of the characters (which sometimes is just the appeal of the actors). This film taps into the appeal of the cast (Cillian Murphy, Brie Larson, Armie Hammer, and Sharlto Copley) but their characters aren't solid enough to make them sympathetic enough. By the last third, I didn't care who would come out on top.

I can't recommend this film. It wasn't anything terrible, but it tried to go for something different and just didn't find anything particularly interesting to show viewers.