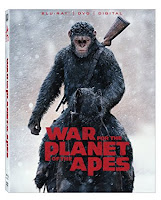 
Caesar (CGI Andy Serkis) and his group of apes tries to hold out in a California forest but they are perpetually hunted by humans. After two harrowing attacks, the second of which resulted in the deaths of Caesar's wife and eldest son, the apes decide to flee to a seeming paradise across a desert. Well, everyone but Caesar decides to go. He wants to take revenge on the Colonel (Woody Harrelson), the leader of the local humans who took a personal hand in killing Caesar's family. Three of the apes decide to go with him to make sure he returns alive to the tribe. Caesar has a difficult journey, both literally and figuratively, ahead of him.

I found the story engrossing and the plot developments interesting. The Colonel is a tough-as-nails villain with just barely enough humanity to make him understandable but certainly not sympathetic. He is superficially modeled after Col. Kurtz in Apocalypse Now, a film that is referenced in other ways as well. Almost the entirety of the rest of humanity is unsympathetic and one-dimensional, the one exception being a young, mute girl adopted by the apes on their journey. Caesar and the apes, by contrast, are fully-rounded characters who form the heart and soul of the movie, dealing with issues in a human way. The characterizations are biased, which is especially interesting as the movie grapples with the worthiness of humanity's continued existence. The ultimate answer is consistent with the story and unsatisfying for me.

The movie is interesting but bleak, which I suppose is a core component of the Planet of the Apes franchise. This movie is particularly bleak.