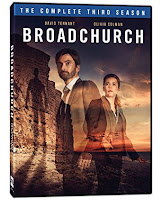 
See my reviews of Series One and Series Two.

A late-40s-ish woman, Trish Winterman (Julie Hesmondhalgh), is raped at the fiftieth birthday party of her best friend. She doesn't immediately report it to the police (she is both ashamed and in shock), which causes problems for the investigation. Evidence isn't as fresh as it could be and there's a lot of ambiguity, as well as a lot of suspects. Trish is separated from her husband who isn't happy with her behavior (though he's the one that caused the breakup). She works at a farm shop on the outskirts of town and her supervisor (the owner of the shop) is a little too concerned about her. A taxi driver who was going back and forth from the party had made romantic overtures to Trish before. And fifty other men were at the party, so D.S. Ellie Miller (Olivia Coleman) and D.I. Alec Hardy (David Tennent) have their hands full.

Meanwhile, the show has a b-story line continuing the Danny Latimer drama, which I thought was wrapped up by the last series. Danny's dad, Mark, still hasn't accepted his son's death. He's estranged from his wife and two daughters and can't get the thought of revenge out of his mind. His wife, Beth (Jodie Whittaker, soon to be Doctor Who), has moved on and is now a victim's counselor/advocate. She is assigned to help Trish Winterman. So the stories start intersecting.

The mystery of who raped Trish Winterman is a little disappointing. I felt like viewers were marched through a long line of red herrings before the investigators were suddenly handed rock-solid evidence against the guilty party in the very last episode, and the ultimate culprit was pretty much unguessable until the last episode. So the mystery was a let-down.

I also found the attempt to squeeze more drama out of Danny Latimer's death unsatisfying. As I said, I thought that story was wrapped up and I found Mark's problems difficult to believe. The story does provide at least one great dramatic exchange between Beth and Mark, all the more powerful because it wasn't hysterics but complete honesty between a couple that handled the tragedy in different ways.

The other two series are very much about the community being in crisis, whether it is more important to keep secrets or to treat others with honesty and love. That theme continues here but is not as smoothly integrated. The show has a nice "take back the night" sequence that's a little corny and a beach football match that's supposed to help repair the community but winds up being an opportunity to throw out some more red herring clues. A few minor plotlines revolve around the school-aged children of Miller and Hardy, dealing with pornography and bullying. Some parents rise to the occasion; others don't. In another subplot, the local newspaper is being gobbled up by a large chain of papers, resulting in the indifferent and exploitative coverage that's more about bringing in the money and less about telling the truth or respecting people's privacy. So the show has plenty of elements on the importance of community, but they are more disjointed.

On the up side, the show deals very well with the impact of the rape on the many characters, providing views from a variety of viewpoints. Other, earlier crimes come out and each victim has different ways of handling her situation. The various men who are suspects show various levels of responsibility and willingness to take it seriously. At one point, Hardy says, "I'm ashamed to be a man." Some of the characters are insensitive but the show, while shocking in parts, is never graphic or gratuitous. The detectives' dogged determination wins the day. This series would be a great starting point for discussions, especially in this post-Harvey Weinstein era.

The acting is very good, especially Coleman and Tennent in their characters' professional and personal lives. The cast manages to make up for weaknesses in the script.

Recommended, though not nearly as good as the first two series (which were great drama).