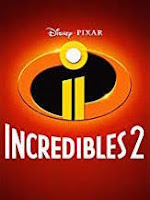 
Incredibles 2 picks up right where the last movie left off--the Parr family (Bob/Mr. Incredible (Craig Nelson), Helen/Elastigirl (Holly Hunter), and their children Dash, Violet, and Jack-Jack) suits up and uses their superpowers to fight The Underminer. After an exciting battle, The Underminer escapes and the city takes a bunch of damage. The Parrs are sent packing. Frozone (Samuel Jackson), who helped in the fight and ducked out in time not to be caught by the police, is invited by a mysterious company to fight against the law forbidding supers to use their powers. Frozone approaches Bob and Helen to join the meeting. Everything seems legit: They are meeting a brother-sister team who run a major telecomm company and want to fight the anti-superhero law. The siblings have a plan to make the supers more relatable--install cameras in their costumes so that everyone can see what the heroes really go through to protect the public. Of the three heroes, they select Helen's Elasticgirl to be the first to make supers look good. Their reasoning--she's historically caused the least damage (i.e. the least expense) in her crime fighting. She reluctantly accepts and Bob becomes a stay-at-home dad dealing with the baby, the new way kids do math in school, and the social drama of his teenage daughter. A new villain called Screenslaver uses hypnosis to control others. Can Elastigirl find and defeat Screenslaver, thereby restoring the reputation of superheroes?

The movie is an exciting blend of action, comedy, and family drama. Pixar has a mixed record with sequels. The Toy Story sequels are great; the Cars sequels and Finding Dory are unimpressive. While this movie is not as great as the first Incredibles, or as great as the Toy Story sequels, it's still a solid movie and very entertaining. Some of the surprise twists are predictable and a key part of the final battle is so obvious that I wondered why they hadn't done it twenty minutes earlier. Even so, the movie is enjoyable.

Also, it was the first trip for our youngest to the movie theater. He loved it and was well behaved during the movie (he did do a lot of talking out loud during the trailers but quieted up for the feature).