Dual/Duel Review: X-Men Days of Future Past Book vs. Movie

Dual/Duel reviews are an online smackdown between two books, movies, games, podcasts, etc. etc. that I think are interesting to compare, contrast, and comment on. For a list of other dual/duel reviews, go here. 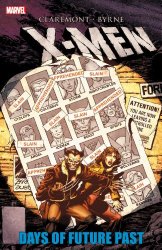 Days of Future Past is a famous story from the venerable Claremont/Byrne era of The Uncanny X-Men comics (an astonishing 16 years (1975 to 1991)). The story is told over two issues, alternating between the then-contemporary 1981 story and a far future dystopia set in 2013. The bleak future is dominated by giant robots called Sentinels. They hunt and imprison mutants. If the mutants are lucky, they live in internment camps. The unlucky ones are dead. The Sentinels have just about mopped up all the American mutants and superheroes and are threatening to expand their program outside the USA. Other countries are threatening to nuke America before they can expand. A small band of the remaining X-Men send Kate Pride, the grown-up version of Kitty Pride, back in time to stop the event that triggered it all--the assassination of Presidential candidate Senator Kelly by Mystique and the Brotherhood of Evil Mutants. Kate doesn't physically go back in time, just her consciousness is sent back into her younger self by an unknown character called Rachel Summers. Kate's attempts to convince the younger X-Men are interesting and the story plays out in a predictable but well-told fashion.

The movie version of the story came out in 2014 and features a bleak 2014 dystopia where the X-Men are on the run from the Sentinels who are chasing mutants (and humans who help them) across the whole planet. A small group of X-Men led by Xavier and (the apparently reformed) Magneto stay one step ahead of the Sentinels and make a desperate decision. They will send one of their numbers back to 1973 to prevent the assassination of Bolivar Trask, the man who invented the Sentinels and lobbied the US government to use them to rein in the mutant menace. Kitty Pride is the one with the power to send people back in time, but the only one who could survive such a long trip would be Wolverine. His consciousness is sent back and he has challenges convincing the younger Xavier and his then adversary Magneto, to work together to prevent the assassination.

The movie also plays out in a predictable fashion but in a much less convincing way. Kitty Pride suddenly has this time travel power as a plot convenience. In order to make things interesting in the 1973 part of the story, Xavier is taking drugs that let him use his legs but completely stifle his mutant abilities. Wolverine has to convince him to get back in the game while also springing Magneto from a Pentagon prison. The interaction between young Xavier and Magneto doesn't have the excitement and freshness that they had in X-Men First Class, mostly due to the mediocrity of the script writing. The whole story is much less compelling than the comic book version (and I did see the movie first, so the book didn't spoil me for it). The film isn't bad, it just isn't as good as the first two X-Men movies or the Xavier-Magneto part of First Class.

As a bonus, the trade paperback for Days of Future Past includes some other stories. First, we see Cyclopes mourning Jean Grey at her burial and get a recount of the history of the X-Men up to that point. The story isn't too interesting, it's more like a greatest hits compilation. Next is an adventure through Dante's Inferno where Nightcrawler is threatened with eternal punishment for killing his brother. This story is much more interesting and fun, as is the next one where Wolverine travels to Canada to reconcile with the Canadian government and his previous team, Alpha Flight. They bond over fighting the woodland horror Wendigo, a monster that's been eating people. The final story is a self-conscious imitation of the movie Alien. Kitty Pride is left alone in Xavier's mansion and has to fight an ancient and horrible monster while everyone else is off celebrating the Christmas holidays. It works as a story on its own but is not particularly outstanding.