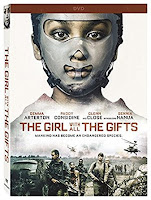 The Girl with All the Gifts (2016) directed by Colm McCarthy


A bunch of children are held in a subterranean facility where they are taught by Helen Justineau (Gemma Arterton). She treats them as children and has a certain affection for them. But they are strapped into wheelchairs that include head restraints while they are not in their cells. Military personnel move the kids back and forth from the cells and the classroom. And another adult, Dr. Caldwell (Glenn Close), is constantly quizzing them to test their intelligence. The most intelligent is Melanie (Sennia Nanua) who is certainly a prodigy. But she, like her fellow students, is also a zombie. They only show the desire to eat others when they can smell them. The adults have developed a gel to mask their scent, so the facility is seemingly secure.

There's been an infectious outbreak that has killed or zombiefied most adults. These adults are fast moving and completely sub-rational--if they are not attacking living things, they stand around almost like statues. The small group of zombie children is both rational and hungry for flesh, an odd circumstance that leads Caldwell to think there's a cure locked away inside of them. She's the classic scientist who wants to solve the problem regardless of the cost. She doesn't think there's a human cost to dissecting the children to harvest their brains and spinal cords, something Justineau completely disagrees with. The base is overrun. The two women, Melanie, and a few soldiers escape into the countryside. As they go, more is revealed about Melanie and about the horror they are going through.

The movie isn't just an apocalyptic survival story, it's more a meditation on human nature and how we treat others. In addition to the tension between the two women, the soldiers are very wary of Melanie even though she is always helpful and calm. She even warns them when she needs to eat so she won't go feral on them. The plot starts rather conventionally but the ending is not at all conventional. Parts of it are hard to watch (like a proper horror film) but the ideas are fascinating and well worth thinking about (also like a proper horror film).

Labels: Colm McCarthy, movie reviews, The Girl with All the Gifts, zombie resource