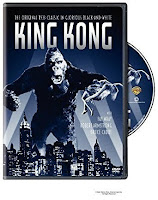 
Carl Denham (Robert Armstrong) is a movie director of jungle action pictures, but his latest project is sure to be his biggest ever. He's got a secret map from a Norwegian captain that shows a Pacific island governed by a great brute known as Kong. Denham's hired his usual ship and loaded it with lots of rifles, ammunition, and gas bombs. He only needs one more item, the most potent bomb he ever carried--a blonde bombshell named Ann Darrow (Fay Wray). His previous pictures all lacked a romantic angle. The critics and distributors think his next film will make twice the money with a female in it. He reluctantly agrees though is quite enthusiastic about the "beauty and the beast" angle. Most of the crew share his reluctance, though their anti-female stance seems mostly based on inexperience. When they get to the island, things don't run according to plan. Ann is captured by Kong. The rescue effort is costly in human life but profitable when they capture Kong and bring him back to New York as "the Eighth Wonder of the World." The New York situation doesn't run according to plan either.

This movie is a classic for many reasons. The special effects, which look dated today, were state of the art and are still impressive given the resources at the time. A lot of care and craft went into scenes of Kong fighting the humans or the other prehistoric giants on the island. The performances work really well. Denham's honesty and straightforwardness seem at first really square but he is the sort of fellow to take charge of a situation even if he can't control the situation. He's a showman of the first caliber. Fay Wray is famous for screaming her way through her performance but she has her charming moments as well. She certainly doesn't have the depth of Naomi Watts's character in Peter Jackon's remake, but Wray isn't a cardboard cut-out either. The New York sequence is perfectly paced and has the iconic Empire State Building ending. The movie is thrilling and satisfying, well worth watching and rewatching.

The movie is discussed on A Good Story is Hard to Find Podcast #185.