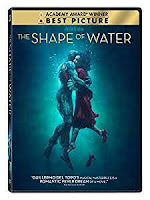 
In 1960s Baltimore, a mute woman named Elisa (Sally Hawkins) works as a janitor in a top secret government facility. She has a lonely and monotonous life. Her best friends are the starving artist in the apartment next door and another janitor who does all the talking for them both, mostly complaining about her husband. Elisa goes through the same routine, working the overnight shift at the facility. Things change when a specimen is brought in from the South American jungles--a fish man (also mute) who surreptitiously develops a connection with Elisa. The Man in Charge (Michael Shannon) is much less friendly with the creature and he's planning to vivisect it to find out as much as he can. Elisa naturally wants to free the fish man with the help of her friends. There's also a Soviet mole in the facility who is supposed to kill the creature before the Americans can discover anything valuable, but he believes more in science than in Stalin and becomes a willing accomplice for Elisa. A breakout ensues.

The movie looks gorgeous. It follows the Vertigo style of deliberately chosen color schemes for locations and characters. The creature (played by Doug Jones in a prosthetic suit) looks an awful lot like The Creature from the Black Lagoon and Abe Sapien from Hellboy, which seems deliberate. He looks both amazing and derivative. He has enough character to make the love story believable. They have chemistry on screen.

The love story is the primary story among the mix of fantasy, horror, and Cold War thriller elements. The romance is touchingly told and has a nice arc to it. Unfortunately, the Cold War stuff is all Hollywood tropes and cliches, making for very uninteresting storytelling. The villain might as well just be referred to as "The Man," considering how one-dimensional he is. The movie does spend a lot of time with him which could have developed him as a character, rather than constantly re-emphasizing what a hypocritical Christian, sexist, and narcissist he is. That whole part of the drama is thin and uninteresting, which is unfortunate since that's what drives the plot forward.

So why did this win the best picture Oscar? Probably it's another The Departed, the fairly average film that won Martin Scorsese his overdue best director Oscar. Classic Hollywood musicals and other films (Elisa lives over a movie theater) play a minor but persistent role, which probably also appealed to Hollywood Oscar voters. If you want to see del Toro's most Oscar-worthy work, Pan's Labyrinth is the film to watch.

I'm glad I watched it but probably will never rewatch it. The visuals and art direction are amazing, the love story is touching, but the narrative has too many uninteresting parts that are given too much time.

Parental warning: The movie has punctuated moments of violence that put it in the PG-13 range, but the sex scenes with nudity make it R-rated and only for adults.