On our visit to Ripon, we went to the cathedral. Like a proper functioning church, they only asked for a donation from visitors. They did have one scheme to get money. If you want to take pictures, you buy a pass for £3, which was okay with me.

The Ripon Cathedral is dedicated to St. Peter and St. Wilfrid, in that order because St. Wilfrid built the original Saxon church in honor of St. Peter in the mid-600s AD. He was also a missionary and abbot of the Benedictine monastery in Ripon. The crypt of the current church is what remains of St. Wilfrid's work.

So this cathedral has been in existence through quite a bit of English history which is reflected in its architecture and its contents.

The medieval screen has had modern figures placed in it, including kings and bishops who have had an impact on the cathedral or on Ripon. The first bishop of Ripon, Archbishop Charles Longley (1836 AD), is right next to James I, King of England who gave Ripon its royal charter in 1604.

Beyond the Medieval Screen is the Choir Stalls built in 1494 with many wonderful and playful carvings. One carving of a griffin chasing a rabbit is thought to have inspired Lewis Carroll's Alice in Wonderland, since his father was a Canon from 1852 to 1868. So yes, Lewis Carroll was a son of a gun. [Editor's note: apologies to all for the bad pun]

The end of the choir stalls behind the medieval screen has some of the organ pipes and a mysterious mechanical hand that was used to help conduct the choir. It acts as a metronome to keep the choir on the same beat as the organist.

The high altar at the back has a fabulous stained glass window. Much of the glass throughout the cathedral is quite impressive. 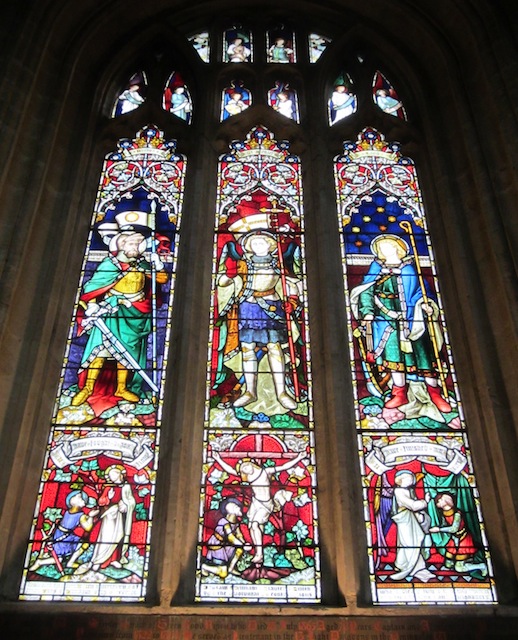 Some of the more recent work is less impressive, such as this decorative metalwork from the 1940s:


There is also an art exhibit in the church with various works sprinkled throughout. They have varying merits. Here are some of the best in my opinion:

Tombs of the Markenfields can also be found in the church. Sir Thomas Markenfield was buried in 1398. His descendants were Royalists who took part in the Rising of the North in 1569. During the Reformation iconclasm, the hands were destroyed and the face obscured on the tomb.


Also of interest right by the tomb is the Mothers' Union Chapel, featuring toys and other things to distract children. This is the first cry room I have seen in a cathedral!


While we were visiting the cathedral, Jacob asked when we were going to pray since we were at church. Bless the boy, we stopped right there and said an Our Father and gave thanks for the wonderful visit to this glorious cathedral.

Jacob also showed his holiness by imitating the columns from the Decorated architectural period (1250-1350 AD). Often the bases of columns would have a face, like such:


We also visited Jacob's other favorite feature, the potty. Getting directions from the lady was a little difficult since she was expecting the word "loo." Once we were clear, we went across the street to a garden, quite idyllic and peaceful.

We look forward to bringing visitors to see this wonderful cathedral. And the gift shop is well stocked with interesting and worthwhile items. Personally, I think any church that has its own beer is great. Another good way to raise money!
Posted by Joseph R. at 6:04 PM