We went for a walk before breakfast and saw the streets trashed by all the Friday night revelers. While we were eating breakfast, we saw the street sweeper truck come through three times!

Our plan for the final day in Bruges was to walk over to the windmills and work our way back to the hotel, taking in sights along the way. Even the walk to the windmills was interesting. We found some holy and some hilarious wall decorations.

We arrived at the windmills and were duly impressed, though they weren't that big and were clearly there for show rather than for work. Jacob liked climbing up the small hills they were on and looking down at the canal and the runners on the path.

We headed down the hill and street to another one of the city gates. This one is called the Holy Cross Gate or Kruispoort.

We arrived at the Jerusalem church (famed for replicas of Holy Land sites, especially the Church of the Holy Sepulcher). Everyone was hungry and cold so we asked for a nearby tea room or coffee shop. We were sent on a bit of a wild goose chase but eventually found a hotel restaurant that claimed it was a tea room, but wasn't really. The service was slow and the selection was minimal. But they did have a roaring fire and an interesting toilet (well, interesting to Jacob, anyway). Fortified, we returned to Jerusalem.

The church wasn't very big. But it was picturesque and we did enjoy exploring it.

We also went into the Kant Museum, which is part of the church's grounds by isn't about the German philosopher. It was about knitting, with many fine examples of lace work.

We tried to visit St. Anna's church, but it was closed for restoration last month!

Along the canal, we saw a boat pass us and Jacob waved. The very exciting thing was people on the boat waving back. Jacob was very happy with that.


By this point we were pretty hungry and ready for lunch. Rather than search for another pub, we went back to last night's fabulous eatery, Cafe Vlissinghe. I had a warming and filling lasagna accompanied by the most shocking beer yet. 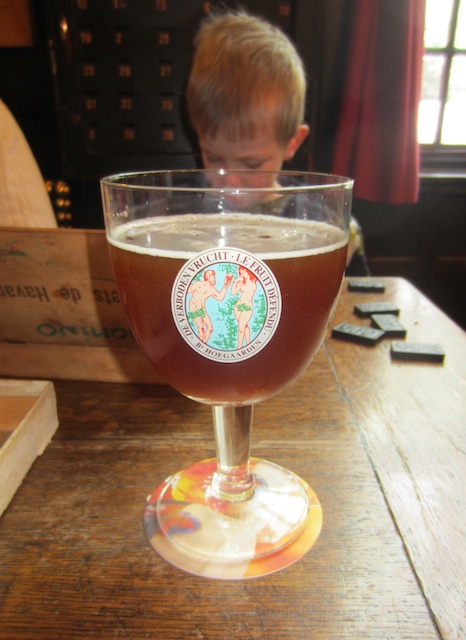 Yes, that's Adam and Eve tasting the forbidden draft! De Verboden Vruct is a nice dark beer. I kept the glass turned away from Jacob and Lucy's eyes! Jacob did play with dominoes and Lucy played with a French Scrabble board while we waited for our food. We also visited the beer garden outside just to see it.

After this we went to the hotel to check out and then keep the children awake by wandering more in the afternoon. More on that in the next post!
Posted by Joseph R. at 3:07 PM