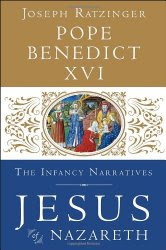 Jesus of Nazareth: The Infancy Narratives by Benedict XVI


Before his resignation, Pope Benedict XVI finished a third volume of theological reflections on the life of Jesus. He describes this book as an "antechamber" (p. xi) to the other volumes. Here he looks chiefly at the first few chapters of Matthew and Luke, the birth and early childhood of Jesus. He considers the intent of the authors in what they wrote, various historical interpretations and understandings of what they wrote (including present-day exegesis of the texts), and the practical impact these writing should have for us.

His explanations of events and their various interpretations is quite clear and insightful. For example, he discusses the manger as the first resting place of the infant Jesus. In addition to the obvious idea that this shows Jesus's humility, Benedict discusses it as the first altar from which Jesus's sacrificial life begins. The manger is a feeding trough for animals, a subtle and surprising parallel to the table of the Last Supper (and by extension, to our churches' altars) where Jesus offers His own flesh as food for us. The book is overflowing with many similar and profound insights.

Another impressive feature of Benedict's writing is his honesty when considering some probably unsolvable problems. He discusses the star that led the Magi to Israel. During the two thousand years since the words were written various possibilities have been considered: a supernova, the conjunction of Jupiter and Saturn in the constellation Pisces, etc. While all are interesting and have various implications, Benedict notes that identifying the exact astronomical phenomenon is probably impossible. Additionally, how the magi came to interpret this phenomenon as the announcement of a new king in Israel will always be "an open question." (p. 100)

The former pope's book on Jesus's infancy is well worth reading, especially during Advent as Christians across the world prepare to celebrate the birth of our Lord and Savior Jesus.