Book Review: The Well of Ascension by Brandon Sanderson 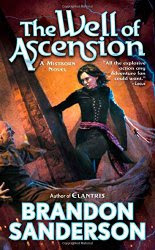 The Well of Ascension: A Mistborn Novel by Brandon Sanderson


Picking up a year after the events of the first volume, this book shows what has become of the Final Empire. In the wake of the Lord Ruler's death in book one, political scholar and aristocratic fop Elend Venture has become the king of Luthadel, the central city of the Final Empire. Being well-read on political philosophy, he establishes an Assembly made up of equal parts from the nobility, the merchant class, and the worker class (known as Skaa). The Assembly shares in decision making with the king, though naturally differences of opinions rise. Elend manages it as best he can. It's hard to maintain control and give people freedom at the same time.

Meanwhile, Terrisman scholar Sazed is wandering the remains of the empire, teaching the people about the ancient religions (that was his research specialty) and researching ancient legends concerning the rise of the Lord Ruler. Since the Lord Ruler's death, the mists that cover their world have become stronger, lasting further into the morning and in some rare cases killing people. The rumors of death are hard to believe but Sazed gains some evidence on his travels. So maybe the Lord Ruler was holding something worse than himself in check while he lived. Things are getting out of control.

All of this is set up in the first fifty pages of the book. But before she sets out for the Well, there's the security of the capital to consider. Other kings want to conquer Luthadel and claim the Lord Ruler's throne (and the secret stash of atium (a metal used by Mistborn)). So the next five hundred pages go through a lot of political intrigue, battles, plot twists, and world building. Also, Vin's feelings for Elend aren't settled yet. They aren't sure they are right for each other but only time and definitive choices will get them together. They finally set out for the Well only to have more plot twists come up.

I enjoyed the main story in this book but did feel like it has a lot of side plots and action (the five hundred pages I mentioned) that don't ultimately contribute to the core story. Of course, they could be set-up for the end of the story in the next volume, which brings up another problem. This novel is the typical "part two" of a fantasy trilogy. In many fantasy trilogies, the first book is written as a stand alone story. If that story is successful, a sequel or two seems justified. Several trilogies I have read seem like the second and third books are really one long story broken over two volumes, rather than two stand alone novels. The end of book two has a big cliff-hanger that doesn't resolve the narrative satisfactorily, forcing the reader to get the next volume to finish the story. Happily, the Mistborn trilogy was written years ago, so I don't have to wait around for the next volume, which I will be starting soon.

At least I'm not caught in an ongoing cycle that may never end *cough*Game of Thrones*cough*.