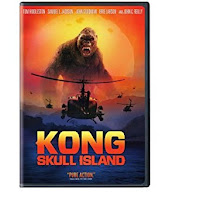 
After discovering a previously uncharted island, corporate science exec Bill Randa (John Goodman) spends his last political favor to send a crew of scientists and soldiers for a "geologic survey" as the Vietnam War ends. Randa's team includes ex-British forces tracker Conrad (Tom Hiddleston) and war photographer Weaver (Brie Larson) who self-identifies as an "anti-war" photographer. The science team plans on detonating several bombs on the island (called Skull Island since it's shaped like a skull) to facilitate the survey. When they get to the island, they encounter more than they bargained for, even Randa, who was expecting to find extraordinary monsters on the island. Action and mayhem ensue.

The 1973 setting provides an interesting political backdrop for the movie, heightening the tension between the military and the civilians. The technology is advanced but not enough to make communication and control of the situation easy. The period music is evocative and the visuals imitating Apocalypse Now and other films seem more like homage than rip-off. It's an original setting for a King Kong movie.

The movie also pays respect to the Kong mythology. The island is full of other dangerous creatures, some as big as Kong, who are a threat to man and to monkey. The natives have their big wall and their weird ways and their faith in Kong as a god. While Weaver isn't offered up as a sacrifice and doesn't shriek like Fay Raye, Kong does protect her when they meet up. The action is entertaining and well executed.

Unfortunately, the movie has too many elements thrown in, leaving it a hodge-podge of themes and ideas. It comments on the Vietnam War. It develops a conflict between science and military. It has a revenge story that isn't all that convincing. It has a bunch of random attacks thrown in for nothing other than to keep things exciting. The natives seem like they have some back story that would explain their strange tattoos and their telepathic communication but that is never explained. Kong is defending the outside world by keeping the weird creatures on the island contained but why they are hostile and why he defends are never satisfactorily explained. None of all these elements are dwelt on long enough to make them really interesting.

The movie is fun but doesn't quite know what it wants to say or says too many things at once, drowning out any deeper meaning.