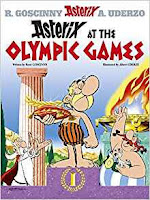 Things are quiet in the Gaulish village that is home to Asterix. The nearby Roman encampment Aquarium is full of excitement. Their finest athlete, Gluteus Maximus, has been selected to represent Rome in the Olympic Games in Greece. He trains in the forest where his confidence is shattered by Asterix and Obelix, whose magic-potion enhanced powers make them faster and stronger. Once the village chief finds out about the games, he wants his tribe to go too. They'll easily be victorious thanks to druid Getafix's magic brew. The whole tribe goes off to cheer on Asterix and Obelix as they compete against the Romans, the Greeks, and the occasional Egyptian, for Olympic glory.

The story is quite funny, with gags about their travel and tourism during their trip to Greece. Also, their conflict with the Romans is smartly handled, as is the gags about the Olympics. This book is among the best of the Asterix stories. 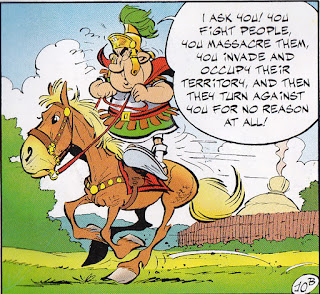