The night before we went to St. Giles Cathedral, we walked by and had a chance to get a night time shot. They haven't lit their Christmas tree yet, for which we were grateful, but it is already up. The church is quite gorgeous both outside and inside and all around.


Saturday morning we took a bus from our side of town (New Town) to the cathedral's side of town (Old Town). We arrived a little before the church was officially open at 9 a.m. so we took the opportunity to walk around the outside of the church in the daylight.


This impressive statue of Charles II is found around the back of the cathedral.  The statue dates from 1685 and is the oldest lead cast statue in England.


We could also see the City Chambers across the Royal Mile from the church.


We wandered into one of the many narrow streets/alleyways that are ubiquitous in the Old Town area. Since this neighborhood has lots of law courts and civic buildings, is it any wonder we found Advocates Close nearby?


The Scott Memorial rose up dramatically in this view from the Close.


We finally went inside the church to look around and say some prayers too. St. Giles is famous for having many of the colors of the clans on display inside. It was amazing to see so many flags, some in the sort of worn condition that makes the viewer think the flags were used on the battlefield and are now in honorable retirement in this house of the Lord. 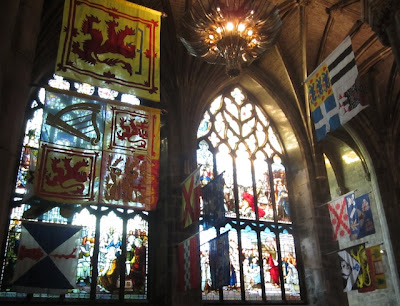 The stained glass was also quite impressive and glorious in the morning sunshine. 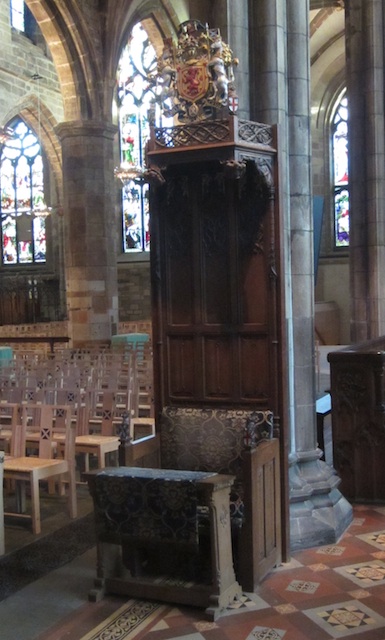 The main altar is located in the center of the church and is quite modest by comparison to many of the other cathedrals we have seen in England, and in fact anywhere.


As we were walking around, the organist came in and started playing some pieces. Jacob, Lucy, and Mommy sat down to enjoy his performance. The first piece was quite nice, but the second was far too loud for Jacob, who ask to leave. That more or less ended our visit inside the church.


Outside, we found the Heart of Midlothian, a heart-shape in the plaza tiles that commemorates the Old Tollbooth Prison that formerly stood here. Also it's the spot where many convicted criminals were executed before the building was demolished in 1817. Lucy was unfazed by the history of the spot.


We still had some time before we'd meet my cousin's family at the National Museum of Scotland, so we decided to have a snack at the birthplace of Harry Potter. But more on that in the next post!
Posted by Joseph R. at 5:33 PM