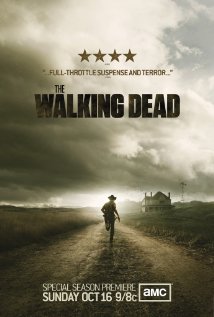 Late teen and up

7 out of 10--A waterlogged zombie (i.e. more bloated than rotting); flashbacks of a zombie attack and character being eaten from the last episode (the flashes are very quick); a zombie splits in half with guts spilling everywhere; bashing in the head of a zombie with splashes and oozing.

A little bit of bad language; lots of lying; a woman pees outdoors, though you don't see anything graphic; the beginning of a sex scene with a little side glimpse of top female nudity, though they cut away to another scene quickly after that so nothing more than kissing and toplessness.

Nothing new or different except for the aforementioned waterlogged zombie.

Not too much humor but plenty of character development keeps this episode entertaining.

With Carl on the mend and the rest of Rick's crew safely on the Greene farm, things are looking up for the weary cast of characters. A more organized and thorough search for the missing Sophia is in the works. They can't start right away since Rick is down a few pints of blood because of transfusions to his son and Shane is limping on an injured ankle. Redneck Daryl heads off to search on his own for the day while everybody else gets organized.

A lot of the episode is taken up with one of the wells on the farm, where they discover a zombie in the water. They need to get it out without just shooting it so they can still use the well (even though there's a least one other well with potable water and some other wells of unspecified cleanliness).

Meanwhile, Daryl hunts more or less fruitlessly, though with some tense scenes searching a random house. Sophia's mom Carol is still working through her issues with God and other characters. Shane is struggling with his demons from last episode. Carol is less suicidal but still wants to carry her gun, even when Hershel Greene asks that nobody carry a gun on his farm. The relationship between farmer's daughter Maggie and Glenn gets hot and cold pretty fast.

Hershel and Rick have a lot of heart to heart talks about how long Rick's people can stay and about faith issues. Rick still feels distant from God, since he prayed for a sign that he's doing right and the sign seemed to be his son getting shot. The end of the episode provides another possible positive sign, though the storytellers leave the interpretation ambiguous.

Fatherhood is another strong theme in this episode, specifically whether Rick is a good father. He lies to his son about whether Sophia has returned safely. This leads to a lot of self-doubt for Rick and reassurances from others that he is a good father even if he doesn't fulfill the ideal model of a righteous man. This struggle is especially interesting to me as a father and it's a quite compelling part of the story.

More on the next two episodes in the coming days. We will get caught up!
Posted by Joseph R. at 10:14 AM