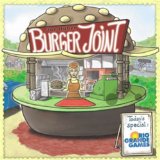 Burger Joint is a fun two-player game where each player tries to build up his restaurant empire. One person builds pizza parlors while the other makes burger joints. The parlors and joints can be upgraded to specialty diners. The diners can be upgraded to upscale bistros. Also, players can buy publicity, which increases the likelihood of winning and lets them steal resources from the other player. Whoever has the fastest growing food chain wins!

The game has a simple yet elegant turn structure. Each turn, the active player randomly draws out colored cubes equal to the number of diners and bistros on both players' boards (initially, a total of four). Then the players take turns drawing cubes from the middle board. The trick here is that if a player is the only one to control, for example, a red diner, then that player can choose that color cube first (assuming red is one of the colors drawn; there are six different colors). After each player has drawn a cube, the subsequent cubes are put in a common pool (the gray area in the middle) so the other player has a chance to get a color he doesn't control.

Then the active player can buy new joints/parlors for two cubes, upgrades to diners for four cubes (which allow for control of more colors), upgrades to bistros for six cubes (which give special abilities and/or more victory points), or publicity for three cubes (which can increase victory points and allows the player to steal a cube from the other player). The colors needed for each item are different; additionally, the colors are different for the burger player and the pizza player. For example, building a burger joint costs one black cube and one yellow cube. Building a pizza parlor costs one red cube and one green cube. So the strategy for drawing cubes is very important. Any unspent cubes must be kept in the warehouse, which only has space for seven cubes. (The seven cube limit applies to the passive player, too!) The player's victory points are recalculated at the end of the turn to see if they've made it to twelve points. If so, it's game over, dude! If not, the other player becomes the active player and a new turn starts.


We've enjoyed playing this game a lot since last Christmas. It plays quickly (about half an hour to an hour) and has many interesting challenges. Deciding which cubes to take, how to spend them for maximum results, which cubes to keep if you get too many/can't spend enough are all challenging questions. The random drawing of cubes makes the game different every time. One game made us certain that there were no brown cubes in the bag because it seemed like we never drew them. After careful counting, we discovered there were just as many as any other color. Little quirks like that also make the game fun and diverting.

Zombie Apocalypse Appropriateness: This game is small and portable, requiring no electricity and only one other player. It's pretty quick so if you have to flee suddenly you can. I think it would also make a satisfactory solo game, playing against yourself. Since there is no hidden information you won't have to keep secrets from yourself. Certainly trust is an issue in a zombie apocalypse, but if you can't be honest with yourself, who can you be honest with?