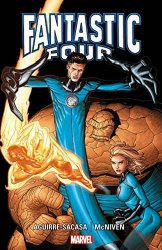 
The Fantastic Four face their greatest challenge ever--bankruptcy. Their accountant has taken their money and run while the city has decided to charge them for damage they caused during fights with bad guys. With no income, they are forced to abandon the Baxter Building and find regular jobs. The Thing works in construction while the Invisible Woman takes a job as substitute teacher. Reed Richards is trying to figure out a way to make quick money on the market, but he too is eventually forced into a menial job. Apartment hunting is a challenge too since they have bad credit and are a high risk for damage. The plot makes for a fun and different story, though it isn't resolved by the end of the issue.

At the end of the issue they decided to go camping in New Jersey to a forest called Pine Barrens with Franklin Richards (son of Mr. Fantastic and the Invisible Woman). The Thing tells Franklin and his friends the legend of the Jersey Devil, a creature that comes and snatches people in the night from the forest. Sure enough, a creature does show up so they have a puzzle to solve, monsters to fight, and people to resuce.

I found these stories fun if not entirely plausible (doesn't Reed Richards have about a million patents that are bringing in money?). The sense of humor is great and the family dynamic of the group (the best part of the Fantastic Four) is perfectly presented. The camping story is a more traditional superhero story and well executed. The other premise is more interesting and I wish it had been finished. This book is a reprint from 2005. Hopefully they will reprint the subsequent trade paperbacks from this writer's run on the Fantastic Four.