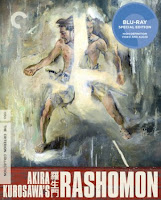 
A priest and a woodcutter are waiting out the rain in the old, derelict city gate called "Rashomon." The time is 12th century Japan, the city is former capital Kyoto. The country and the city have seen better days. A third man comes to the gate. He notices how glum they are; they tell him the most recent depressing news. A samurai was  killed in the forest. The woodcutter discovered the dead body, so he testified at the trial three days ago. The trial included depositions from the woodcutter, a bandit named Tajomaru, the dead man's widow, and a medium channeling the dead man. The varying stories don't match up, and it's very clear that the individual testimonies are given to make the witness look the best or most sympathetic in the story. The third man cynically harps on the fact that people lie to make themselves look good. The priest despairs of the existence of human goodness. Are all people selfish connivers?

The movie is very challenging in that it never spells out what happened in the woods, whether the samurai was killed by the bandit or by his own hand. Was the wife (who was raped by the bandit) complicit in the murder? Each version of the story has the characters behaving very differently. Even when the woodcutter gives a second version of his story, it still doesn't fit together with everything else. I've watched the film three times and at this point I'm fairly certain there is no way to figure out the actual details of what happened. So viewers may be frustrated by that ambiguity.

But the movie is not a police procedural. The thematic focus is not on truth but on the deeply flawed and broken way people treat the truth. The third man is very cynical and very modern in his understanding of human nature--everyone is selfish and works for their own good; either there is no evil (in which case, every action is morally okay) or everything is evil (in which case, why hold people responsible?). The priest has a classic crisis of faith--he sees no good in the world. There have been famines, fires, plagues, earthquakes. The world and the people in it are crumbling down like the Rashomon gate. The rain only adds to the dismal misery. Can anyone overcome their selfishness and act for the good of others?

The source material for the movie, author Ryunosuke Akutagawa's short stories "In the Grove" and "Rashomon" (reviewed here), clearly answer no. The movie presents Akutagawa's pessimism faithfully but adds a new twist at the end that undercuts that pessimism and gives at least one reason for hope.

The movie can also be viewed as an allegory for post-WWII Japan's situation, seemingly on the brink of ruin. Providing his countrymen with a glimmer of hope, an inspiration to get up and move on, is a beautiful thing.

Highly recommended (unless you really want the police procedural).