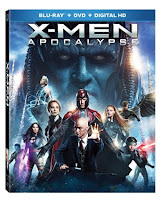 
The ancient mutant En Sabah Nur/Apocalypse (who has been amassing other mutant's powers over centuries) is beaten in 3000 B.C. Egypt by perfectly normal, everyday Egyptians. He isn't killed, only put to sleep for about 5000 years. While investigating mutants in 1983, Moira McTaggert accidentally awakens Apocalypse who brings together his four horsemen (because he's Apocalypse, get it?) to take over the world. Can Charles Xavier (James McAvoy) and his students and allies stop the madman before his plans wreak havoc? Of course, the answer to that question is obvious, which does not mean the movie can't still be entertaining.

Unfortunately, the film has a lot of things working against it. Many scenes are clearly designed to be seen in 3D, which is distracting when watching a 2D version at home on DVD. The movie also has too many "this scene is so cool we are going to show it in slow motion" moments. Which doesn't even include the Quicksilver (the guy who moves at high speed, so naturally he has some slow motion stuff) scenes--they are fun in small doses but again there are too many of them and looks like reruns of scenes from Days of Future Past.

Too many characters are left undeveloped or doing nothing until the end. Poor Angel and Psylocke are little more than eye-candy combatants with no character at all. They are part of the four horsemen but don't do anything until the climatic big battle. The other horsemen, Storm and Magneto, have good development, even with Storm's minimal screen time. Still, they too have almost nothing to do till the finale. Apocalypse even has to kidnap Xavier to make his plan work, making the other four look especially useless.

Having read the Age of Apocalypse graphic novels, I had a good idea of what Apocalypse's plan was, but that's not communicated clearly in the film. Apocalypse talks a lot about the devastation he's going to cause but does hardly any until the ending, even missing some fairly big opportunities early on. He does have menacing physical presence, but his incoherent and slow scheme make him into a lesser villain, which is a shame for someone named Apocalypse.

Other characters fair better. Xavier and Magneto work well as foils for each other (if only Magneto hadn't spent so much time with Apocalypse!). Happily, they don't overshadow the other characters--Cyclopes, Jean Grey, Mystique, and other X-Men get enough character development and moments so they don't look one dimensional like Angel and Psylocke. Director Singer is good at handling a large cast of characters but this movie has too many even for him.

The movie would benefit immensely from judicious script editing/re-writing and fewer "look how amazing these special effects are" moments. While certainly not as bad as X-Men: The Last Stand, this film is definitely on the lower end of the X-Men franchise.