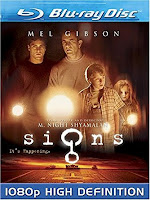 
Graham Hess (Mel Gibson) is a former preacher living with his two children and his brother (Joaquin Phoenix) on the family farm some 45 miles from Philadelphia. His loss of faith is relatively recent--his wife died in a horrible car accident six months ago and Graham's trust in God completely vanished. Crop circles appear in the corn fields overnight. He thinks it's the work of vandals but very soon the television is reporting crop circles all over the globe, as well as other evidence of alien activity. Are they about to be invaded? Is this the end of the world?

The movie is a combination of an alien invasion thriller and an existential crisis for Graham. The alien invasion is exciting and tense, even though the story is told mostly through news coverage on television. Some aliens do show up in their area. The home siege at the end is particularly well executed, going for the "less is more" style famously used by The X-Files. The film also follows in the footsteps of The Twilight Zone, adding a more substantive story underneath the sci-fi trappings. Graham's loss of faith is just that--he doesn't believe God is the good and providential Person everyone assumes He is, otherwise why would He let a senseless accident rob him of his wife? Graham has taken the cross off his wall and won't waste another minute on prayer. He explains to his brother that there are two kinds of people in the world, those who take luck as a sign of someone higher up watching out for them and those who think luck is only circumstantial. The first people have a reason for hope when an alien invasion is looming. The second people have much more reason to fear. Graham puts himself in the second camp but clearly struggles with where he really stands and where his family and friends need him to be. That answer is what the movie is ultimately about.

Shyamalan is famous for his twist endings. The twist in the invasion story is a bit unbelievable though it is crafted in support of the twist in existential crisis story. I found the ending moving if not great and do heartily recommend the movie. It's not Shyamalan's best work but it is very good, like the best of The X-Files and The Twilight Zone.

I was inspired to rewatch this because Julie and Scott discussed the film on A Good Story is Hard to Find. They give the usual excellent commentary and insights.