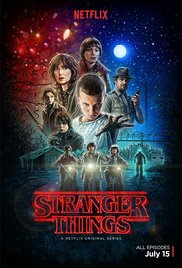 Stranger Things Season One created by the Duffer Brothers


In small town Indiana Will Byers lives the normal life of a pre-teen geek. He plays Dungeons and Dragons with his three friends, all of whom are members of the middle school A/V club. It's 1983, so that means they mostly use ham radios and hand-held counterparts. The boys are bullied by the school jocks, too. The boys ride their bikes all over town. Will's mom is divorced, so home life is a little run down.

The typical life ends when Will vanishes one evening. His friends and the local police search for him in the woods surrounding the town. Meanwhile, a young, crew-cut girl shows up. She doesn't talk much and has telekinetic powers. The boys befriend her, hoping she has some clues as to where Will has gone. She indicates there's a monster (which the viewers get shadowy glimpses of) responsible for the disappearance. A shadowy government agency is trying to hush things up and to recover the girl, so the stakes get high very early.

The show is a fairly interesting sci-fi conspiracy. It is jam-packed with cliches, tropes, stereotypes, images, and music from 1980s science fiction and fantasy television and movies. The creators are clearly inspired by Steven Spielberg, John Carpenter, David Cronenberg, Stephen King, James Cameron, George Lucas, et al. I found all that a bit distracting and unnecessary--the best parts of the show are the original ones, like when the girl goes into a sort of psychic nether-space where the only things visible are she and her reflection in the water she's standing in (and the objects or persons the shadowy agency wants her to spy on).

The actors all do a great job, making the story believable and compelling. The story moves along quickly without feeling rushed. I enjoyed it but wasn't as wowed as I was expecting from all the reviews. It's a good show and I will give season two a try when it comes out this year.

Stranger Things is available for streaming through Netflix.
Posted by Joseph R. at 2:00 AM