Book Review: Asterix the Gaul by R. Goscinny and A. Uderzo 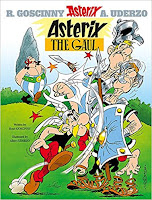 
Julius Caesar's Roman Army has conquered all of Gaul (modern-day France) except for one village on the coast. That village is the home of Getafix, a druid who brews a magic potion to make the villagers incredibly strong. The village is consequently unconquerable, though it is surrounded by Roman encampments. In desperation to find out the village's secret, the Roman commander Crismas Bonus sends a spy into the village. Will the Romans finally be able to conquer all of Gaul? The best warrior in the village, Asterix, is a clever trickster who is also unstoppable when he's got the potion. A better question is, will the Romans have a chance?

This is the first volume of the highly popular Asterix series. The story is entertaining and the comedy is laugh-out-loud funny. The creators clearly set a pattern for their comics that they consistently follow throughout the series. The characters are already well-defined and have their typical behavior found in later stories. The plots are an excuse for poking fun at the ancient Romans and making lots of clever puns. It's light, quick, fun entertainment.