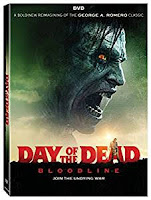 Day of the Dead: Bloodline (2018) directed by Hector Hernandez Vicens


A small group of zombie apocalypse survivors shelter in a government bunker. Zoe (Sophie Skelton) was a brilliant medical student who is now the doctor for the group made up mostly of soldiers and of various stray civilians who wound up at the bunker. One civilian child comes down with an infection, forcing Zoe to demand a supply run back to her university's medical facility, which has plenty of antibiotics and other drugs locked away. The trip doesn't go as planned in several ways. The worst problem is someone who stalked Zoe and is now an uber-zombie has snuck back into the base by hanging on to the underside of one of the Hummers. She recognizes that he has some higher functioning. He might be the key to creating an inoculation against zombie bites.

This movie is terrible. The original Day of the Dead by George Romero had its shaky moments but also had interesting if implausible ideas. The acting was a bit too hammy to be taken seriously enough and the gore was so over-the-top that Romero didn't bother getting an MPAA rating. In this remake, the acting is just as bad if not worse. The gore is still very high but this is thirty years later and standards have dropped, so the remake got an R rating. The ideas in this movie are so implausible that they are not remotely interesting. To take one example--even if you are vaccinated against zombie bites, being bitten by a zombie is still going to be awful and probably fatal if you lose too much blood or it eats too much. Everybody in the film must have high blood pressure, because every other zombie bite results in a gigantic spray of blood. This is not comic, over-the-top gore like the Evil Dead films. It just over-the-top.

Maybe this movie could have been a parody of how dumb some zombie films are but they play it straight.

Not at all recommended--this is the worst film I've seen in many years, and I watched Plan 9 from Outer Space last October.