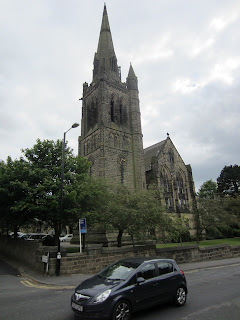 I forgot to mention another quirk about our temporary living place. The church across the street is for sale. You can see the sign out front. Which made me wonder, "Is someone going to be driving along, see the for sale sign, and say, 'Wow, I should buy that church!'" I can't imagine that happening, but maybe my zombie brain just isn't imaginative enough.

Before you start thinking to yourself, "Wow, I should buy that church!" let me mention a few drawbacks about the church. First, there's the undesirable neighbors across the street. Though I have it on good authority that they will be moving out in a few weeks. So you could just be patient and bide your time.

Which reminds me of the second problem, the clock tower. Astute observers may guess from the picture below that I took the photo at 3:36 p.m., or to write it more Britishly, 15:36. That's a great guess, quite logical and based on the evidence at hand. The only problem is that we were walking in the morning when I took the shot. The clock tower is not working. So if you plan to make an offer on it, be sure to have that checked out.


A third problem is the tower. It seems they've swapped the bell out for an old-style television antenna:


Not only is this a bad trade, but I think the antenna is also probably useless since British TV has switched to digital like we did in America.

The biggest problem is the spooky lights at night and the seemingly human forms that move past the windows in the dusk and the dark. You might think someone is fixing it up for the sale, but I like to think the church is haunted. It's the romantic in me. I guess you'll just have to check for yourself. Maybe they'll give you a discount if you can survive a whole night inside the church. It's Summer now, so nighttime is pretty short here at the higher latitudes.

If you are in the market for a church, let me know. I'll scare up more information. But I won't spend the night.
Posted by Joseph R. at 8:35 AM