On the Way to the Caves

With a fine Saturday before us (which is now behind us, since I'm writing on Sunday), we decided to go on an adventure to see some caves. Along the way, we stopped in a charming little hamlet in the Yorkshire Dales.

Jacob and Lucy voted to visit the local playground, which turned out to be quite the fun place to be. 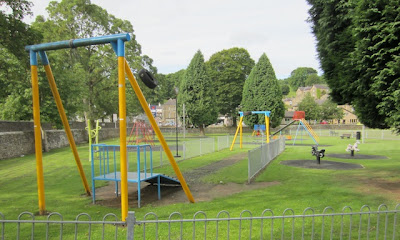 In addition to the usual swings, merry-go-rounds (called "roundabouts" by the British), climbers and such, the playground also had a zip line. When Jacob first saw this contraption, he did not know what to make of it. Being the good and loving father that I am, I demonstrated how it works. He was totally agog and wanted to go right away. I helped him the first ten times, then he started riding on his own. Check it out:


We even managed to get some video of the second and third solo flights:

Jacob had his own name for the zip line. He called it a "trap slide." We're still not sure what that means, but Jacob is consistent and insistent about the name.

Lucy tried it too, but we don't have any photographic evidence of that. We do have shots from the rest of the playground:

After such an extensive workout, we needed to recharge on calories. What better way to do that than stopping at a tea shop for a cup of tea and a snack. We found the Old Granary Tea Shop on our way back to the car and stopped in. Jacob loved the retro bathroom. Not only was there no hand dryer, there were no paper towels either! They had an actual towel hanging on a rack by the sink. If the toilet were any more retro, we'd be digging a hole in the ground. But I digress.

We ordered tea and scones and cookies for the kids. When the lady behind the counter asked me if I wanted butter, cream, or jam, I told her to give me the works.

I carefully put the butter on, then the jam, then the cream. This cream is not the famous clotted cream, about which I will blog one day, it was just regular cream. It was all so delicious, I forgot to take any after photographs. Eating it with a nice cuppa tea hit the spot. I went to pay the bill at the counter and discovered the shop was even more retro. No credit cards, only cash. After I paid up, we were ready to go on to explore some cave. I'll save that for the next blog!
Posted by Joseph R. at 3:11 AM