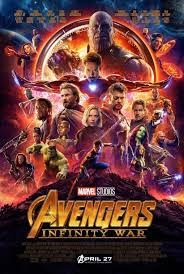 
Thanos of Titan has set himself a quest. He wants to collect the Infinity Stones, a set of six gems that give the wielder power over the Soul, the Mind, Power, Time, Reality, and Space. Combined, he will have the power to do anything he wishes. What he wants to do most of all is solve a problem. On his home world of Titan, the population outgrew the planet's resources. Titan was devastated. To prevent such a tragedy on other worlds, Thanos decided to wipe out half of all life on every other planet in the universe. He justifies himself because it's necessary and he randomly chooses who will die. He begins a literally semi-genocidal campaign. With the Infinity Stones secured in a special gauntlet, he will have the power to halve the universe's population by merely wishing it so. If he can get them all.

This being the Marvel Cinematic Universe, several of the Stones have already appeared in previous films. Vision's forehead gem is the Mind Stone, Doctor Strange's Eye of Agamoto is the Time Stone, etc. Thanos and his minions split up to collect the Stones, which means a lot of battles with the Avengers who have been scattered since Captain America: Civil War. Loki still has the Stone from the Tesseract. The Asgardians are Thanos's first target. Thor and Loki have a humiliating defeat, which puts Thor on the path of revenge. Back on Earth, Iron Man (Tony Stark) teams up with Doctor Strange (Stephen Strange) to protect the Time Stone while Captain America and a handful of other Avengers fight in Scotland where Vision has been laying low, though not low enough to avoid the notice of Thanos's minions.

The movie quickly turns into an action-packed fight to keep the Stones from Thanos. Even with the very grim plot, the filmmakers are able to keep up the comic tone of the previous films, giving many characters moments to shine and to look like human beings rather than costumed crazy people. Almost every character from previous films shows up which does mean that some get short shrift. The film moves swiftly but doesn't feel rushed.

The ending is a huge cliffhanger which may be frustrating for some viewers, especially with the end credits scene that references a hero who has not yet appeared in the MCU. I recognized the logo and am excited for this character to show up.

Highly recommended, though it might be difficult to follow if you haven't been keeping up with the Marvel movies. And the cliffhanger, while very dramatic, is not very convincing.