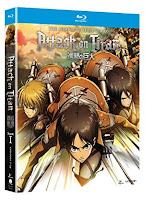 
See my review of the first manga here.

After enjoying the first volume of the manga, I tried the first episode of Attack on Titan and was blown away. The show is more vivid and visceral just because the format is better suited to the action-filled story.

The time is the far distant future. Humanity has become trapped inside a walled area (there are actually three ring walls--Sheena, Rose, and Maria). Outside the walls are Titans--gigantic humanoids who eat humans. The average Titan is typically between two to fifteen meters (six and half to fifty feet) tall. The walls kept them at bay for a hundred years, but then a new sort of Titan appeared. The Colossal Titan (sixty meters (two hundred feet) tall) is able to break a hole in Wall Maria and the other Titans came pouring in. The Colossal Titan mysteriously disappeared and the surviving humans were forced to retreat behind Wall Rose. Eren Jaeger is a boy at the time and witnesses the death of his family. Before his father died, his father told Eren he had a secret in their basement. Eren has the key but has been unable to return. He trains to join the armed forces, hoping to take revenge on the Titans for his losses. Five years later, just as he and his friends are graduating from boot camp, the Titans (including the Colossal) attack again and the rookies are drawn into battle immediately.

Little is known about the Titans except some key facts--they appear mindless, they eat people, and their only truly vulnerable spot is the nape of the neck. Any other injured spot will grow back alarmingly quickly. The humans developed a harness with gas-powered grappling hooks as a way to fight the Titans. Battles are very tough (though also very cinematic, with lots of Spider-man-like swinging from buildings and walls and trees). The humans suffer great losses but still fight on. Sometimes battles lead to more information about the Titans, fueling the hope that humanity can eventually take back the world.

The story is a very gritty and gory war. The Titans do eat people and viewers see that fairly graphically displayed several times. The Titans are brutal; sometimes the humans are brutal to each other. The characters talk a lot about personal sacrifice and the duty to follow orders, even in hopeless situations. Occasionally the officers don't provide all the information about what's going on, leading to conflicts and bad decisions that seem like good decisions. The loss of comrades is tough on the military and also on the families back home, who are both proud of and concerned for their children who have gone to war.

The style of storytelling is very Sturm und Drang. The characters' emotions are often hyperbolic. The life and death situations involve the seemingly worst sorts of death. The music emphasizes the heightened emotions and peril, making the series exciting, if occasionally over the top. Check out the initial credits, which captures what I am trying to describe:

The animation and editing also enhances the storytelling, with the occasional freeze-frame or odd angle to create visual interest and show the chaos. The story also provides mysteries about where it is going, making it just as fun to think about after the episodes as during the episodes.

Highly recommended. I watched it streaming on Netflix, though it is also available on disc and from other streaming services.