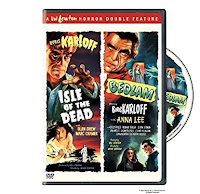 
In 1761, the infamous mental hospital St. Mary's of Bethlehem Asylum is known as Bedlam. It's run by Sims (Boris Karloff), a toadying, frustrated man who sucks up to the nobility (his benefactors, including the easily manipulated Lord Mortimer (Billy House)). By contrast, he is harsh and cruel to the inmates. He faces a big challenge when Lord Mortimer's protege, Nell Bowman (Anna Lee), finds him a bit repulsive and decides to visit the asylum. Her sassy and mocking tone changes when she sees the conditions of the inmates. She is even more repulsed. Nell convinces Mortimer to provide funds for reforms, like decent food and actual beds for the inmates. She convinces Mortimer until Sims catches his ear and convinces Mortimer that the expense will cut into his cosy lifestyle. Sims's cruelty doesn't end there--he convinces Mortimer to strip her of his patronage and eventually commit her to Bedlam. Her haughtiness gives way to her better nature as she tries to help out the inmates even as she is one of them.

The movie is a fascinating study in contrasts. Both Sims and Nell are sharp-witted and given to disdain for others. But Sims is fully committed to securing his own position while Nell learns to help out others in any way she can. She's inspired by a Quaker stonemason who wants to do some work at the asylum. He too is horrified by the conditions but is true to his faith and refuses to disdain others or participate in the corruption of Bedlam. He pushes Nell in the right direction and provides minor support throughout the film (and eventually winds up as a sort of love interest for her, though that is very minimal and feels tagged on to meet Hollywood expectations). Nell's influence on the other inmates inspires them to stand up for themselves in a critical moment. She makes a great heroine against Karloff's evil scheming.

The acting is very good. Anna Lee holds her own in scenes with Karloff, which is no small accomplishment. The other actors give fine performances, not going too over-the-top as the "loonies" or too detached from reality as the aristocratic class.

The sets mimic the Hogarth paintings (a set known as "The Rake's Progress) from which the story is inspired. The DVD has an interesting commentary by a film historian, including details about Hogarth, Karloff, Lee, director Mark Robson, and producer Val Lewton.

The movie is available as a horror double-feature in the Val Lewton collection along with Isle of the Dead.